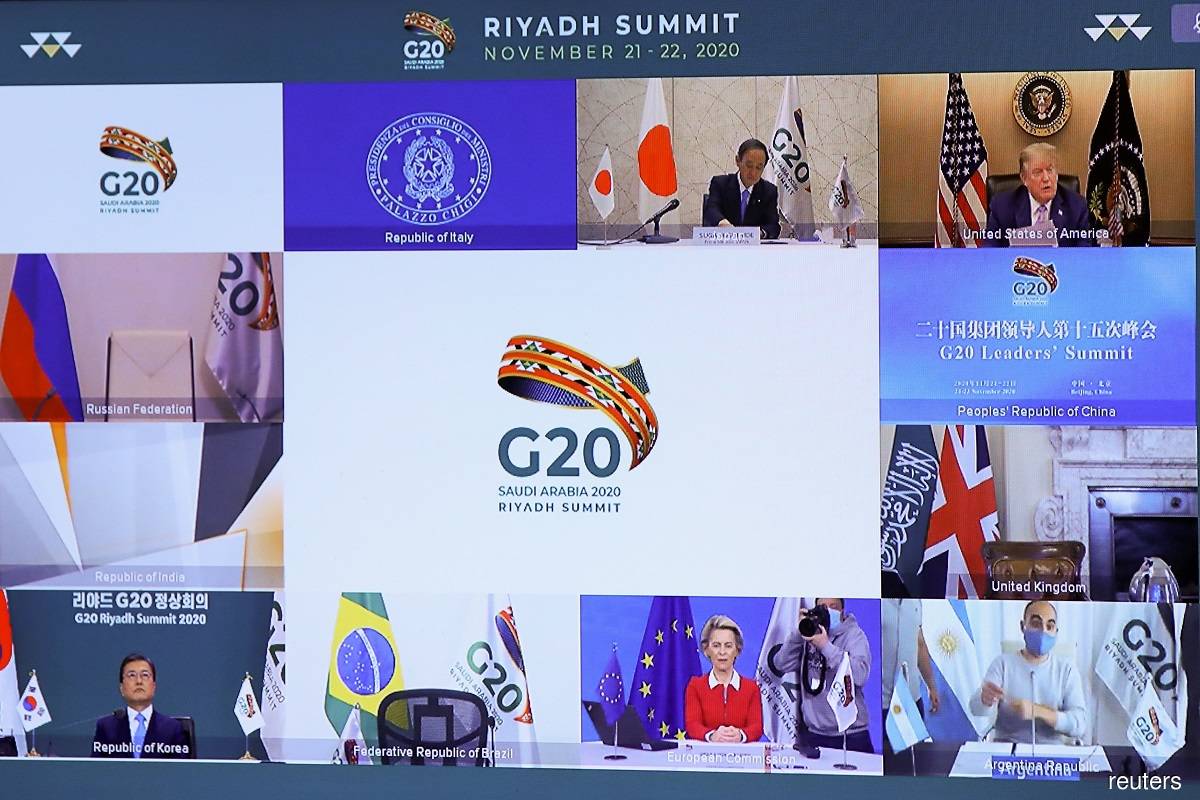 MOSCOW/ROME/WASHINGTON (Nov 22): Leaders of the world's richest countries are promising to ensure equality in the race to vaccinate people against the coronavirus, even as President Donald Trump stays quiet on sharing US-made vaccines with other nations.

The US president told his counterparts yesterday at a virtual summit of Group of 20 (G20) nations that any American who wants the vaccine will be able to get it, and singled out American producers Pfizer Inc, whose jab has been developed along with a German company, and Moderna Inc, according to officials who asked not to be named discussing the talks, which were not open to the press.

Trump praised American leadership, claiming credit for what he said was an efficient fight against the virus and success in bolstering the nation's economy. But he said nothing about granting access to American vaccines by the rest of the world.

Trump's comments stand in contrast to other leaders, many of whom spoke during the meeting, hosted by Saudi Arabia, of the need for fair distribution of vaccines, especially to poorer nations.

The summit communique — a copy of which was seen by Bloomberg and which the US as a member state will have agreed to — pledges to "spare no effort to ensure their affordable and equitable access for all people, consistent with members' commitments to incentivize innovation". It calls widespread immunisation a "global public good".

Shortly after Trump's remarks yesterday he left the virtual session — while UK Prime Minister Boris Johnson was speaking — and was replaced first by Treasury Secretary Steven Mnuchin and then White House economic adviser Larry Kudlow, according to officials familiar with the meeting. Some other leaders also dropped off after giving their speeches, the officials said.

Trump later departed the White House for his Virginia golf course. A US official said it was standard practice for leaders to come and go during such summits, which can go on for many hours. The official, who asked not to be identified discussing private matters, said the president stayed for at least the first hour of the meeting.

Russia in August trumpeted its success in becoming the first nation to register a Covid-19 vaccine, Sputnik V. US and European rivals, though, are now moving faster to produce their vaccines and obtain regulatory approval. The European Union has reached a deal with Pfizer, which is partnered with Germany's BioNTech SE, and is negotiating an accord with Moderna.

China, meanwhile, is already rolling out mass vaccine output to fight the disease, offering it as a tool of soft power.

Echoing Trump, Brazilian President Jair Bolsonaro said it was up to each individual to decide whether to be vaccinated, adding that the pandemic should not justify attacks on people's freedom.

Trump was not alone in praising his own country's efforts. But Russian President Vladimir Putin also said his country was ready to share its vaccines with others that need it. That is even as Russia has not produced enough doses to start mass inoculation of its own population.

"The main risk, of course, remains the likelihood, despite some positive signals, of mass, long-term unemployment and the accompanying rise in poverty and social dislocation," Putin said in his speech. "And the role of the G20 is to ensure this doesn't happen."

"It is a case when competition may be inevitable, but we must proceed primarily from humanitarian considerations and make it a priority," Putin added about vaccine availability, according to an official Kremlin translation of his remarks.

China, likewise, made a point of offering up its vaccines. "China will honour its pledge, provide help and support to developing countries, and strive to make vaccines a global public good that is accessible and affordable to all countries," President Xi Jinping told the meeting, according to state broadcaster CCTV.

Turkey's President Recep Tayyip Erdogan told the meeting the G20 should work to secure the "affordable and fair distribution of Covid-19 vaccine for everyone". Canadian Prime Minister Justin Trudeau also said countries should share vaccines, and stressed the importance of multilateral cooperation against the virus, according to a G20 official.

South African President Cyril Ramaphosa, who holds the rotating chairmanship of the 55-nation African Union, called for all countries to have "equitable and affordable access" to a vaccine once it becomes available and urged the G20 to help ensure any funding shortfalls are addressed.