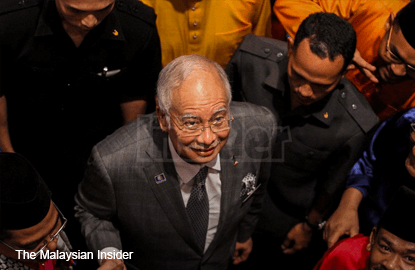 “I would like to clarify that from the time I first received the investigation papers, I did communicate with (MACC chief commissioner) Tan Sri Abu Kassim Mohamed via phone.

“And also by the modern way of WhatsApp. They are all of course confidential.”

“To say that I did not communicate with them (MACC) after receiving the investigation papers is not correct,” he said in response to questions from the media after his press conference.

The A-G was commenting on a statement earlier from MACC special operations chief Bahri Mohd Zin who said the Attorney-General’s Chambers was likely pleased with the investigation papers as there was no request for its investigation officer to come in for any discussion on the facts of the case.

“It is normal for the attorney-general to call up the top management at MACC or the main investigation officer on any high-profile case before deciding on whether to prosecute the matter,” Bahri had told The Malaysian Insider, adding that such a request was not made for these two cases.

Apandi said today MACC had done a thorough investigation because the volume of the file was almost “equivalent to my height and which is true”.

“However, me and my team have done a very thorough examination of the papers. We have also done a forensic analysis of the whole evidence, because it involved figures, names and whatnot.

“We took trouble over the weeks to locate the money trail for us to fully understand what transpired in the episode,” he said.

Last Friday, the MACC resubmitted its papers on the investigations into SRC International and the RM2.6 billion donation to the AGC.

The two cases are the RM2.6 billion found in Najib’s bank accounts and claims that RM42 million flowed from state-owned SRC International into his accounts.

The AGC had on Jan 18 returned the two investigation papers seeking more information.

MACC first submitted the investigation papers to the AGC on Dec 31.

Today, Apandi, who was appointed to the post last July, cleared the prime minister of any criminal wrongdoing.

He said there was “insufficient evidence” to implicate the prime minister.