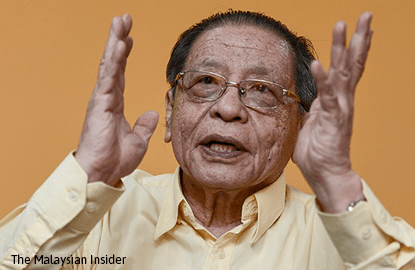 KUALA LUMPUR (Jan 26): After clearing the prime minister of corruption, Attorney-General (A-G) Tan Sri Mohamed Apandi Ali should now disclose the recommendations made by the anti-graft agency in its investigations into the RM2.6 billion donation and related probe into SRC International Sdn Bhd, DAP said today.

"Why did he accept the astronomical donation for the 13th general election campaign in the first place and why did he return RM2.03 billion in August 2013?

"What happened to the balance of RM570 million from the original sum of RM2.6 billion?" Lim questioned in a statement.

The Gelang Patah MP also wondered why Najib never admitted that he returned the money to the Saudi royal family.

Lim also said that there had been speculation that Tan Sri Gani Patail could have been sacked because the A-G's Chambers under him was preparing to charge the prime minister for corruption.

The "extraordinary circumstances" of Apandi's appointment as A-G by Najib in July last year were reasons why the new A-G should had avoided any conflict of interest and withdrawn from any decision-making on the Malaysian Anti-Corruption Commission's (MACC) investigations.

Lim said Apandi's decision to clear Najib should now be reviewed and the best people to do this was a high level three-man committee comprising two former judges and the former A-G Tan Sri Abu Talib Othman.

A review of the A-G's decision was necessary, Lim said, to determine whether there had been a conflict of interest and if Apandi's decision not to prosecute the prime minister was correct based on the MACC's investigation papers.