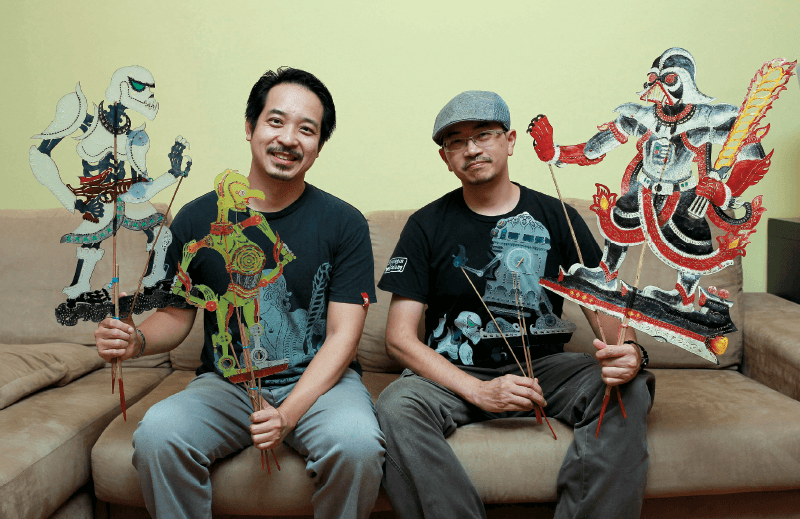 If names of characters like Sangkala Vadeh and Puteri Leia have piqued your interest, then perhaps Fusion Wayang Kulit duo Tintoy Chua and Take Huat are a step closer to realising their unique ideals of reviving the art of wayang kulit in Malaysia.

Wayang kulit is usually associated with the legendary Hikayat Seri Rama and the triumph of good over evil, but now you can also see popular superheroes in shadow puppetry form. Tintoy and Take Huat, who are the founder and co-founder of Fusion Wayang Kulit respectively, are excited to reveal their latest DC superheroes collection that will be showing for the first time here in Kuala Lumpur. It is interesting to see the puppets of all-time favourites such as Superman, Batman and Wonder Woman dressed in their usual gear, but amalgamated with wayang kulit elements.

Fusion Wayang Kulit started off when Tintoy was invited to participate in an art exhibition called Designers Weekend a few years ago. Following the success of the Fusion Wayang Kulit’s maiden show — Peperangan Bintang in 2013, inspired by the iconic sci-fi film Star Wars — the group went on to create more puppets and put up more exhibitions including the recent one in Gurney Paragon Mall, Penang in August this year.

Both Penang-born Tintoy and Take Huat agree that “Peperangan Bintang was a very exciting project”, but they stress that the star of the show is wayang kulit. “We do not want to limit ourselves to Star Wars alone. It is not about Star Wars, it is about wayang kulit,” they explain when we meet at their studio in Ampang.

When asked how Star Wars had made the cut, Tintoy, a character designer at Action Tintoy Design Lab tells us animatedly, “It has spaceship, it has aliens, it has good and evil … At the end of our brainstorming session we simultaneously exclaimed — Star Wars!” The struggle between good and evil is a common element in traditional wayang kulit shows and this draws a parallel with the story line of Star Wars.

After much research, trial and error, Fusion Wayang Kulit with its legion of puppets was born. “We wanted to do something about Malaysian culture and as a character designer it was easier to relate to wayang kulit, which was based on characters too,” says Take Huat, who is a senior art director at Geometry Global. “I got this crazy idea of reviving this traditional art. I knew it was going to be huge, huge not in terms of success, but in terms of [having] a lot of things to do.” Since the production of their first two puppets in July 2012, they have been fortunate to gain guidance from Pak Daim, a Tok Dalang or master puppeteer from Kelantan, who contacted them via Facebook upon learning about the group.

The “fusion” aspect is apparent in the collaboration of these two sci-fi-loving designers and 63-year-old Pak Daim who is an expert in his field. “He (Pak Daim) does not really know about Star Wars but is willing to look into this. He sees our project as something that can attract the youth and he has been looking for ways to revive this art too,” Tintoy says when speaking about the partnership.

The origins of shadow puppetry is debatable. It can be found in many countries in the Southeast Asia and Tintoy and Take Huat point out that theirs is based on Malaysian wayang kulit and not the Javanese version, which differ from one another in terms of the aesthetics of the puppets used in each show.

It takes two to three weeks to produce each puppet, and the process begins with designing and sketching each character before consulting Pak Daim on the accuracy of the design. Then the puppet is designed by computer before it is sent to Pak Daim, who will print out the design, attach it to cow hide and commence the knocking process that will result in holes or intricate designs that create the silhouette of the puppet when placed in front of light.

Tintoy and Take Huat are cautious not to stray too far from the original art form or change the experience of watching shadow puppetry. The focus is to enhance it instead. “We want to stay true to the traditional wayang kulit, what we have done is enhancements,” Tintoy says. A typical wayang kulit performance by the group would involve Pak Daim as the Tok Dalang as well as an array of lighting and sound engineers who control the video projector for the light (as opposed to using oil lamps or candles), an animated background and various voices for different characters.

The idea behind taking something traditional and combining with something futuristic, be it Star Wars or DC Superheroes, is to make the former more relatable to a new generation of audiences. The appearance of each puppet is amalgamated with the traditional aesthetics of wayang kulit puppets, maintaining the fundamentals of the art while being relevant to a larger audience.

“We definitely want to do more performances. We see that it is a working formula, so we will continue doing it,” says Tintoy. Fusion Wayang Kulit combines a love for art and character design with the dream of reviving wayang kulit in Malaysia in hopes that this form of art will go beyond only being taught in schools or read about in books.

The Shadow of Change Exhibition featuring the DC superheroes collection, existing puppets from Peperangan Bintang and a special Halloween collection is open for viewing from now until Nov 8. Drop by Lot G-17, ground floor, Bangsar Village 1, Bangsar Baru, Kuala Lumpur between 10am and 10pm to view the exhibition. More information can be found on www.facebook.com/FusionWayangKulit.