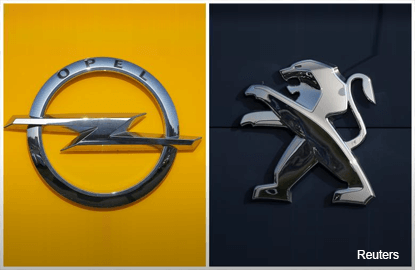 LONDON/FRANKFURT (Feb 14): PSA Group is holding talks with General Motors about buying its European Opel division, the French carmaker said on Tuesday, a deal which would increase competition for market leader Volkswagen.

The maker of Peugeot, Citroen and DS cars is "exploring a number of strategic initiatives with GM with the aim of increasing its profitability and operating efficiency, including a potential acquisition of Opel," a spokesman said.

GM and PSA already share production of SUVs and commercial vans, a relic of their last attempt to forge a broader alliance, which was unwound in 2013 with the sale of the U.S. carmaker's stake in PSA.

Together, PSA and Opel would command a 16.3% share of the European car market compared with Volkswagen's 24.1%, based on 2016 data. They would overtake Renault as the closest rival to the German carmaker.

For GM, selling Opel and Vauxhall, which added almost 1 million cars to its sales, could mean giving up on the global volume race in which it is currently ranked third behind Volkswagen and Toyota, with just over 10 million vehicles delivered last year.

The Detroit-based group may keep a stake in the combined entity, one of the sources told Reuters.

The confirmation of talks came after sources told Reuters earlier on Tuesday that the two companies were in advanced discussions to combine PSA with the U.S. carmaker's Opel business.

In a statement, PSA warned that there could be "no certainty over the conclusion of an agreement".

PSA shares traded 3.7% higher by 1305 GMT, having earlier been as much as six percent higher. Milan-listed shares in Fiat Chrysler also gained on renewed prospects for consolidation in the industry.

Spokespeople for Opel and the French government, which owns 14% of PSA, had no immediate comment. A spokesman for the Peugeot family, which holds a matching stake in the carmaker, was not immediately available.

Under Chief Executive Carlos Tavares, PSA has rebounded from a 2013-14 brush with bankruptcy to reach record levels of earnings, posting a 6.8% automotive operating margin in the first half of last year.

GM has consistently struggled to make a profit at its Opel division, which includes Britain's Vauxhall brand. It had previously discussed a sale to Canadian parts maker Magna in the aftermath of the financial crisis, before pulling the plug on the tentative deal in 2009.

The company missed last year's target of reaching breakeven in Europe, despite buoyant demand, and warned it would struggle to restore regional profitability before 2018.