VENUS ASSETS SDN BHD, the developer of the upcoming prestigious Four Seasons Place Kuala Lumpur, is believed to have outdone itself with the sale of a duplex residential unit for an estimated RM21 million, or RM3,300 psf.

Industry players contend that at RM3,300 psf, it could be the country’s highest price locked-in for a residential unit sold by a developer. A source familiar with the deal tells The Edge that the new record price for the residence was set by a local buyer. The deal was completed last month. Based on reports, as recently as six months ago, units were being sold at RM3,000 psf.

It is a 65-storey tower comprising Four Seasons Private Residences Kuala Lumpur and the Four Seasons Hotel Kuala Lumpur. Only the residential portion of the building, still being constructed, on Jalan Lumba Kuda, off Jalan Ampang, is available for sale.

Property valuer and consultant, Stanley Toh of Laurecap Sdn Bhd, tells The Edge that while new launches such as Four Seasons have managed to breach the RM3,000 psf mark, other units such as those in Banyan Tree Pavilion are going for between RM2,500 and RM2,700 psf on the secondary market.

He adds that units that are able to fetch higher prices are often branded properties. “Most of the new development launches with a price tag of close to RM3,000 psf would have some sort of branding attached to it. 8 Conlay is expected to have a collaboration with Kempinski while others nearby are Harrods Hotel & Residences and Pavilion Banyan Tree,” he says. With such branding, the developer is able to obtain a premium and justify the high price tag, he adds.

At Four Seasons Place, there are 242 residences, ranging from studio to seven-bedroom units. The Edge understands that the take-up rate for the units now stands at 73%. Four Seasons also takes pride in the fact that the penthouses, measuring 11,900 sq ft, were booked years ahead of the project’s official launch in January 2013.

An earlier report had put the gross development value of the project at RM2.5 billion, but with prices hitting RM3,300 psf, the GDV of Four Seasons Place, which is being built on a 1.06 ha site, could be much higher.

The project is being constructed by the China Railway Construction International Group. While the cost of construction and interior design is not known, it was reported in July that the value of the contract won by China Railway was RM950 million.

The project, which commenced in late 2012, is expected to be completed in 2017. The land is said to have been purchased by Venus Assets in 2003 for an estimated RM90 million, or RM788.80 psf, from Tan Sri Khoo Teck Puat, who was once the largest shareholder of Standard Chartered Plc. Piling works commenced in 2009 but stopped shortly thereafter, before the project was relaunched in late-2012.

The reason for the delay was due to Venus Assets seeking a partner. It is said have held talks with Middle Eastern investors, Khazanah Nasional Bhd and even Kingdom Group. At one time, it had even held talks with KLCC Property Holdings Bhd to look at the possibility of extending the Twin Towers development.

Venus Assets posted its maiden revenue in the financial year ended Dec 31, 2013, of RM102.59 million, possibly after officially launching Four Seasons Place. Profit after tax in FY2013 was RM21.68 million, compared with a net loss of RM7.03 million in FY2012. 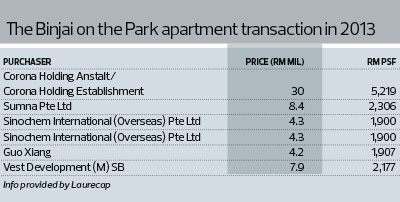