BASELWORLD 2015 is now officially over. There were some incredible watches, both formal and sport, plus some downright ugly ones (and even a US$35,000 (RM128,800) robot-shaped clock). Watches don’t have seasonal cycles as fashion does, but every year trends do emerge. They can be as simple as a popular dial colour (or two) or as complex as a genuine innovation in technology — no small feat, considering the basics are about 400 years old. 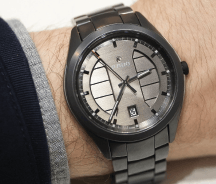 1. Fresh Materials
The days of choosing among either steel, gold, and platinum are over. Whether it’s due to the creativity coming from independent watchmakers or the challenges being posed by wearables-making technology giants, watchmakers are working with less common materials — and even inventing new ones. Bremont has teamed up with Boeing to bring proprietary titanium alloys to your wrist, while Rado introduced a new kind of lightweight ceramic poached from Formula 1 (Si3N4, for the nerds out there). New materials also means new finishes, so your watch can look like the performance machine it is. 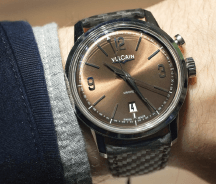 2. Going Brown (and Blue)
It’s something of a running joke among those of us who scribble about watches for a living that every spring, you can count on glossy fashion magazines to run some cheesy headline about how blue watches are the next big thing. So to keep myself above reproach, I’m throwing brown into the mix. Nearly every major brand, from Bulgari to Rolex, seemed to unveil some blue-dialed creation, while a handful of smaller brands, including Grand Seiko and Vulcain, showed sophisticated brown models. Blue is easy, brown is hard, and there are an abundance of good options out there, whichever way you want to go.

3. Embracing Digital Technology
The Swiss mechanical watch industry got pummelled in the 1970s and 1980s, when quartz watches from Asia became affordable and widely available. The coming wave of smartwatches could very well hit the industry with a fresh set of challenges — only this time, traditional watchmakers don’t want to get caught sleeping. Makers such as Frederique Constant are launching combination wristwatch-fitness trackers, while Bulgari announced a concept watch that acts as a digital key to encrypted data. The big news, of course, was TAG Heuer’s partnership with Google and Intel, though it will be a few months before we see a full-fledged Android Wear watch emerge from Switzerland.

4. Classic Styling
Brands such as Tudor and Longines have been wooing collectors with modern replicas of vintage classics for the better part of a decade. This year we’re seeing a different flavour of nostalgia take hold: Instead of taking designs right out of the archive, brands are creating genuinely new watches that adhere to a pared-down aesthetic that was popular 50 years ago. Zenith’s El Primero Chronograph Classic might be the best example of this, but Vulcain’s new guilloché dial Cricket and TAG Heuer’s Carrera Caliber 6 hit the mark as well. Slim cases, subtle colour schemes, and beautiful, open dials are hallmarks to watch.

5. Not a Trend — Rose Gold
Come on already, stop talking about rose gold. We get it: Gold comes in colours other than yellow and white. Whether you call it rose, red, pink, or blush, it’s the same stuff, and watch brands can stop patting themselves on the back for finally offering the option for most of their watches. The entirely rose gold Nautilus from Patek Philippe might be one of the best watches of Baselworld 2015, but that’s largely because it’s exactly what collectors have been seeking for years. No one talks about how big diamonds are this year or how hot cashmere is going to be in the fall, and it’s time we treated this richly tinted gold the same way.