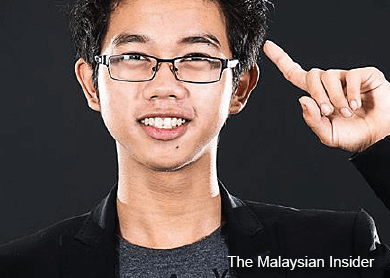 TANJUNG MALIM: Some years ago, child genius Adi Putra Abd Ghani made waves with his speed and skill in solving mathematical problems. Now 16, Adi is still pursuing his mathematical passion locally and overseas — but on his own, a forgotten genius let down after various promises made to him by the federal government fizzled out.

Crowned the Islamic Mathematician of the century by the Riau University in Indonesia in 2009, Adi produced 235 mathematical formulas and published 12 of them in a book titled Seni Matematik Islam (The art of Islamic Mathematics).

His book is used as a reference for primary and secondary students in Brunei, but has not gained recognition in Malaysia.

“I launched the book at the International Book Festival in November 2011 at the Putra World Trade Centre.

“After that I used the book to teach in Brunei. The government there had adopted this book as a reference book for their students,” he told The Malaysian Insider at his home in Tanjung Malim, Perak, recently.

“I am quite disappointed because if possible, I would like to share this knowledge with my own countrymen. That is the priority. The problem is when decisions are made by people at higher levels,” he said.

“When I teach in schools, I use the book for motivation. The feedback from teachers and students has been really good. It makes them more interested in Mathematics,” he said.

Still actively giving lectures on the subject, Adi said he used to feel like a “guinea pig” for the government’s education development programme.

But it was his experience under a government programme for child geniuses where he tasted the disappointment of unfulfilled promises, he said.

“I was like a guinea pig. That’s what I feel about what happened because I was promised a module for child geniuses.

“I was six years old then. In the morning I went to the International Islamic School — studying Year 5 for Science, Year 6 for Mathematics and Year 3 for English. This went on for a year,” he said.

In the afternoon, he would attend classes at the International Islamic University (UIA) to study A-Level Physics, Chemistry, Biology, Mathematics and Additional Mathematics.

This resulted in him stopping school halfway to focus on the A-Levels. He completed the school-leaving qualification but was never issued a certificate by the university, on grounds that at age 6, he was too young.

Adi, whose ambition is to build a satellite, said that he no longer wants to remember that period.

“I have plenty of history with the government. I am tired of it now.”

Adi is currently working to save money and is looking for a sponsor to further his studies. His wish is to enrol in Monash University in Australia where there is a programme for child geniuses.

He also wants all his 235 mathematical formulas to be validated by the academic world some day.

The teenager also said he had an unhappy experience in entrepreneurship when he tried to commercialise a stress-relieving supplement which was accused of containing steroids, despite it passing laboratory tests at Universiti Teknologi Malaysia.

“I tried several times to gain approval from the Health Ministry but it never happened. Then I met ministry officials who then dropped the steroid claims, but said I never obtained approval to sell the product,” he said.

“A week later, they gave approval. The product is still selling today but the whole episode has affected its image,” he said.

He said it is high time Putrajaya developed a plan for nurturing child geniuses to stem the brain drain and outflow of skilled labour and knowledge from the country.

“At Nasa (National Aeronautics and Space Administration), there are many Malays. Even in leading universities, many lecturers and students are our people.

“The problem is, why are they abroad? We need to have a module for geniuses. Not for a few but for many. Everyone has their own talent,” he said, adding that his friends overseas had told him of Malaysians working in high technology sectors abroad.

“Foreigners appreciate these talents. They see the ability of these Malays and they are offered jobs paid in US dollars. They are given funding.

“If we go on like this, we will never manage to gather a group of experts in Malaysia, be it in Science or Mathematics,” he said.

“Money is not the main reason for them refusing to come back. Many of them still have the Malay spirit. But why return to a place where they are not appreciated?” — The Malaysian Insider