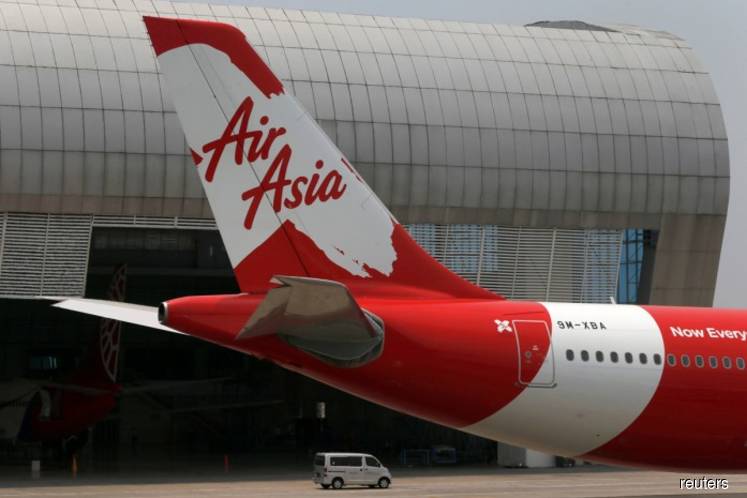 KUALA LUMPUR (Aug 23): Analysts have revised downwards their earnings projections for AirAsia X Bhd (AAX) after its just-announced "whopping quarterly loss", taking into account of a more conservative yield growth due to the less-than-expected passengers carried in the first half of its financial year 2019 (1HFY19).

MIDF Amanah Investment Bank Bhd Research said this in a note today as it lowered its target price on the stock to 19 sen, from 22 sen previously, following the downward revision in earnings forecasts for FY19 and FY20 to RM17.9 million (previously RM68.7 million) and RM65.6 million (previously RM74.4 million).

However, the research house maintained its "neutral" call on AAX and its view of AAX's ability to record profit for FY19, albeit at a marginal level given the tough operating and regulatory environment.

"This could be possible through various cost reduction initiatives and better capacity utilization mentioned earlier. However, this could be weighed down by the pressure on yields.

"The adoption MFRS 16 will be a headwind in the next coming years as the majority of AAX's fleet are leased. Nonetheless, AAX is expected to gain from lower amount of interest beyond the fifth year of the lease term. A re-rating catalyst for AAX would be a favourable review in the passenger service charges by the government," said MIDF.

Meanwhile, Affin Hwang Capital too expects AAX's business environment to remain challenging in view of the subdued passenger growth and weak ringgit against the US dollar. The research house maintains its "sell" rating with a lower 12-month target price of 14 sen, from 17 sen before.

"While we expect AAX's business prospects to improve in 2H19 due to seasonal factors, the market condition remains challenging and AAX may miss our earlier earnings projection.

"We cut our 2019-21E earnings forecasts by RM11 million to RM91 million to account for: (i) lower revenue forecasts due to the challenging business outlook; and (ii) RM73 million one-off adjustment from sale and leaseback of three aircrafts.

"All in, we expect AAX to report losses in 2019-20E; the weak results should put pressure on AAX's share price," Affin Hwang analyst Isaac Chow wrote in a note today.

AAX shares were one sen or 5.13% lower at 18.5 sen at the time of writing, valuing the company at RM808.89 million. A total of 8.38 million shares exchanged hands, making AAX one of Bursa Malaysia's most active stocks.

Low-cost long-haul carrier AAX reported a net loss of RM207.11 million for the second quarter ended June 30, 2019 (2QFY19), from RM57.46 million recorded in the corresponding quarter last year, which it blamed on a weaker ringgit and loss on disposal of three aircraft under a sale and leaseback arrangement.

The over four-fold rise in net loss pushed its loss per share (LPS) for the quarter to 5 sen from 1.4 sen previously. Quarterly revenue fell 4% to RM1.01 billion from RM1.06 billion. The disposal loss, its stock exchange filing today showed, amounted to RM72.5 million.