HOW do you transform a concert hall full of grown women into a gaggle of screaming schoolgirls? With two words — Boyce Avenue. The trio of brothers who rose to fame on video-sharing site YouTube was at KL Live at Life Centre on Feb 12, much to the delight of more than 2,000 fans.

The evening downpour did not deter a long queue of fans who were waiting for the doors to open. And they finally did at 7.30pm. Master of ceremony and radio personality Jin Lim (JinnyBoy) and the opening acts — local talents Narmi and Elizabeth Tan — warmed the crowd to a pretty toasty temperature in time for Boyce Avenue.

When Alejandro Manzano, who at 29 is the youngest, Fabian, 31 and Daniel, 36, took the stage at 9.30pm, they stole everyone’s hearts at their first-ever Malaysian appearance, together with drummer Jason Burrows, Alejandro’s long-time best friend.

Their performance kicked off with an original tune but the simmering excitement got explosive with Katy Perry’s Teenage Dream, their second song. Alejandro’s soulful voice prompted a sing-along.

It was a smooth performance by Boyce Avenue as the brothers switched between covers and originals. About 20 minutes into the show, they opted for acoustic renditions of their songs, true to their YouTube personas. It was a lip-biting night of awe as Alejandro blew everyone away with his impressive vocal control and range in each song.

When Boyce Avenue transitioned into Coldplay’s A Sky Full of Stars, the crowd was taken aback by the sheer emotion injected into the lyrics. It was apparent that Alejandro and his brothers’ passion on stage mesmerised the audience as they quietened down to enjoy the raw melancholic tone.

The live show provided an insight into how Boyce Avenue evolved from the boys who had done covers on YouTube since they set up their channel in 2007 to a full-fledged band of men. They have certainly come a long way and their maturity shone through as they kept their cool and performed through technical problems.

Despite Alejandro being the lead vocalist, guitarist and pianist of the band, Boyce Avenue was a cohesive group of musicians making beautiful, live music. Alejandro made sure Fabian, who plays guitar and sings, and Daniel, who is on vocals, bass and percussions, got just as much of the spotlight.

They left the stage to chants of “We want more” and in about two minutes, returned to appease encore demands. Alejandro delivered an acoustic rendition of their original Broken Angel, a song he wrote about a friend who had gone through hardship, overcome it and moved on to help other women in similar positions. Upon reaching the end, Alejandro called his brothers and together took a groupfie with the audience before breaking into one of their first few covers on YouTube — Use Somebody by Kings of Leon.

Boyce Avenue marked the wrapping up of the night with Tracy Chapman’s Fast Car, one of their favourite songs growing up, and to date. The event was as much a spectacular lights show as it was a music concert since the lighting gave the band a lot more stage presence.

In just over 90 minutes, it was evident that Boyce Avenue will go on to build musical success with the 6,719,868 subscribers and 1,753,540,841 views on their YouTube channel. Here’s hoping they come by again. 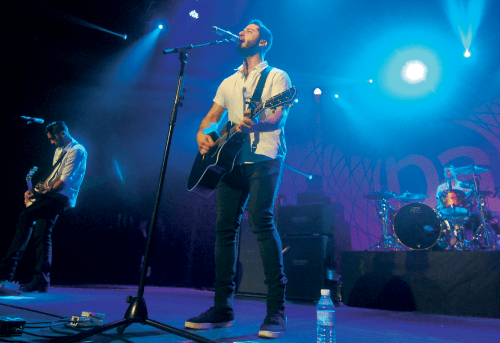