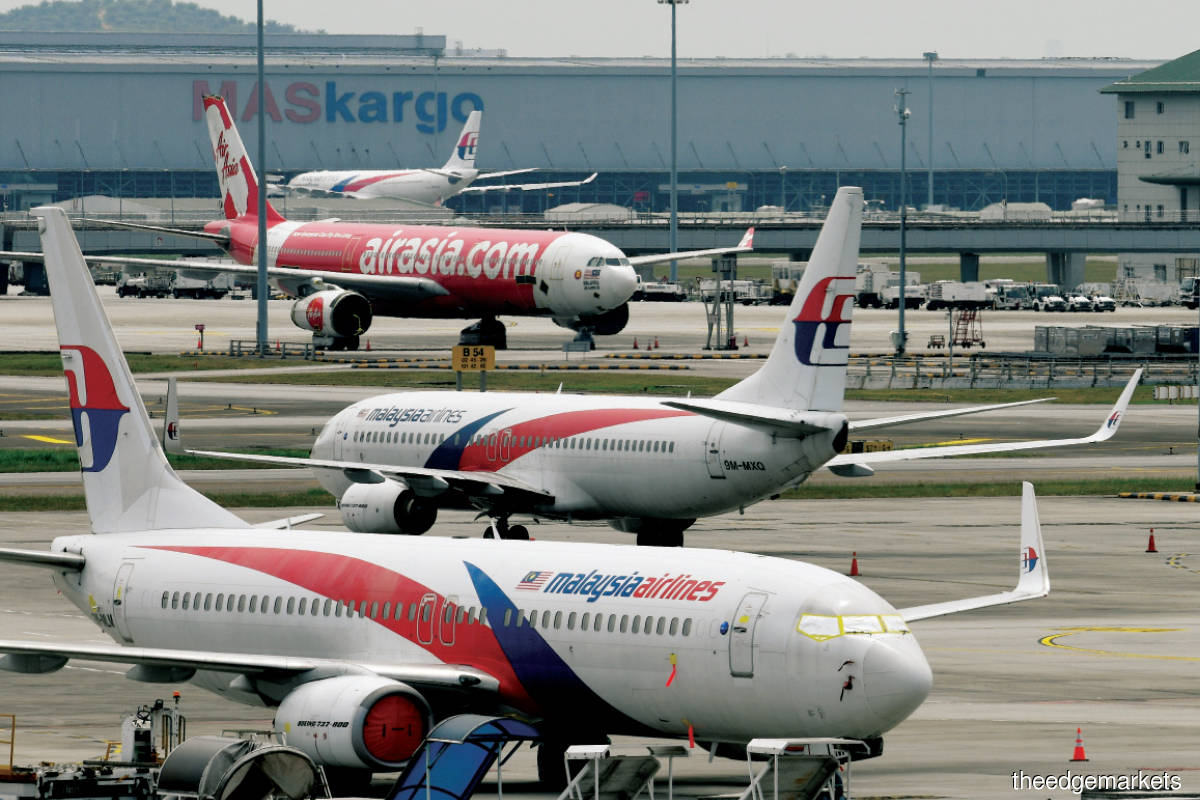 Although the pandemic has left more than 90% of the airlines’ planes grounded, they remain registered with CAAM’s system and Voo says the regulator must have enough manpower for the registered number of aircraft

TWO years ago, the Civil Aviation Authority of Malaysia (CAAM) thrust Malaysia into the global spotlight, but for the wrong reasons after the US Federal Aviation Administration (FAA) downgraded the technical regulator for failing to meet International Civil Aviation Organization (ICAO) safety standards.

The downgrade to Category 2 marked a first for Malaysia’s aviation safety regulator since it was assigned a Category 1 rating in 2003.

It also served as a wake-up call for the government as CAAM is an agency under the Ministry of Transport (MoT). Malaysia joined countries such as Thailand, Bangladesh, Curaçao, Costa Rica and Ghana that were placed under Category 2 — a rating that indicates deficiency in one or more areas, including technical expertise, trained personnel, record-keeping and/or inspection procedures.

Thus, when Captain Chester Voo Chee Soon became CEO of CAAM on June 1 last year, he took over what looked like an unenviable job. He had an overwhelming set of problems to address, ranging from poor morale and lack of manpower to inadequately trained aviation safety inspectors, documentation and areas of oversight.

“When I joined CAAM, one of my first few priorities was to build morale. I realised that even though CAAM has many good and competent officers, the unfortunate downgrade to Category 2 by the FAA had left the staff feeling demotivated. So I wanted to build morale, confidence, and motivate the people internally. I wanted to build CAAM from inside out,” he tells The Edge in an interview. Voo brings 27 years of flying and management experience, including as the director of flight operations at AirAsia Bhd, a wholly-owned subsidiary of low-cost airline AirAsia Group Bhd. At the same time, the regulator had not hired any new personnel in the past few years, leaving the staffing levels very low. “We were short of manpower, especially qualified inspectors. Fortunately, I received tremendous support from MoT and the board of authority members to recruit more qualified candidates over the last six months,” says Voo.

It did not help that CAAM’s staff pay is tied to the government’s pay scale, which makes attracting and retaining top talent a challenge. According to him, CAAM is working to change that. He says the government still aims for the authority to become an autonomous regulator that is financially independent.

“A consultant has been appointed to study our human resource system, offer recommendations on a comprehensive remuneration package and review the authority’s existing fees and charges with the aim of making it financially independent. The consultant is coming in early next month and is expected to submit its report in three months.”

Voo points out that for the size of the industry in Malaysia — which has three major airline groups, namely Malaysia Airlines, Malindo Air and AirAsia Group, and a sizeable number of private and general aviation operators — a fair number of flight inspectors would be between 20 and 25.

“When I came into the company, the number of flight inspectors was below market needs. Similarly, we had a shortage of aircraft inspectors. Our job, as a safety and security regulator, is important as we need to carry out surveillance and inspection works on the industry to make sure that the operators are in compliance with regulations and, ultimately, public safety is not jeopardised. Thus, we need sufficient manpower to perform our job, which we have now,” he says.

Although the Covid-19 pandemic has left more than 90% of the airlines’ planes grounded, they remain registered with CAAM’s system. “As long as they are registered, the regulator must have the manpower for the registered number of aircraft,” he notes.

In the first few months after taking the reins, Voo also got down to business, beefing up training for CAAM’s staff. “We had some inspectors and staff that were doing their job for many years and were able to do it, but as a regulator, our staff would also be required to undergo competency training.”

But the pandemic posed a challenge for him due to the closure of the country’s borders. “The training for inspectors was provided by overseas providers. However, we managed to speak to them to provide the training online. This would not have been possible pre-Covid-19 crisis. Thus, we were able to get training completed by December last year even though the borders were closed,” he says.

Is CAAM ready for FAA’s re-audit?

Six months on, Voo says CAAM is back on track with eight authority members who collectively bring 252 years of aviation, transport, finance, engineering and legal experience to the authority. He has also hired two individuals in the newly created role of deputy CEOs for the oversight of regulations and operations, and appointed directors across all 11 divisions within CAAM. “Previously, some of the positions were left vacant after the departure of their heads due to natural attrition such as retirement.”

Morale has also returned. “I gauge this through employee turnover, which has been low. Another gauge of employee morale is how we react to the industry. I would like to think that if the staff are not motivated, our reaction to the industry would be slow. But in the past six months, our reaction time to the industry has been twice as fast as before, and we are more facilitative [of the current operating environment],” he says.

“With our internal transformation in the past six months, I can also safely say that our capability to maintain public safety and surveillance of the civil aviation industry is at a high level. Of course, regaining Category 1 status remains key and that is one of the main achievement targets that I have set for myself and CAAM.”

Still, CAAM is not out of the woods. Voo believes the authority has about one-third more to go in its internal transformation before it is ready for a re-audit by FAA on ICAO safety standards to restore its Category 1 status.

Early this month, CAAM released a new civil aviation directive that follows all the technical standards of ICAO Annexes, with guidance materials for the industry to follow. “We have given the industry three months to adapt to it and also allow them to provide feedback,” says Voo.

He says he does not have a timeline for when CAAM can regain its Category 1 status as the closed international borders are also making it difficult for a reassessment by the FAA. Nevertheless, he says he continues to engage with the FAA every three weeks to update the US aviation authority on the progress of its transformation through video conferencing.

“This depends on how fast the FAA can audit us. It’s important for me that CAAM regains Category 1 status as soon as possible. So far, they are positive about our transformation in terms of boosting our manpower and training needs and building our state safety programme and surveillance. So now, we just have to wait for the borders to reopen before we can take the next step.

“But to be honest, given the industry slowdown, it has given us a bit of a breather to quickly recruit and train our people. It has been a slight advantage for us as a regulator,” Voo adds.

According to International Air Transport Association regional vice-president for Asia-Pacific Conrad Clifford, anything related to safety is always a priority.

“Malaysia still needs to do the necessary to reinstate its Category 1 rating. Regaining Category 1 status will also help Malaysian carriers get access to the US market, either through direct flights or through code sharing with US carriers, especially when travel demand returns. The current downturn in aviation could allow CAAM to commit resources to address the findings,” he tells The Edge.

With the coronavirus crisis not going away anytime soon, it remains to be seen when that will be.

CAAM-Mavcom merger on track to complete in 2Q

The Malaysian Aviation Commission (Mavcom) is on track to be absorbed into the Civil Aviation Authority of Malaysia (CAAM) in the second quarter of this year, CAAM CEO Captain Chester Voo Chee Soon says.

The merger will see CAAM’s role expanded to cover the economic and commercial functions of Mavcom in addition to its own technical and safety oversight activities. The decision to merge the two aviation regulators was made two years ago when the Pakatan Harapan coalition was in power.

Malaysia’s aviation authority was split into two bodies in 2016, with the establishment of Mavcom in March that year as an independent economic regulator for the civil aviation industry under the Mavcom Act 2015 (Act 771). However, CAAM remained an agency within the Ministry of Transport’s ambit and comes under the CAAM Act 2017 (Act 788).

“When I arrived at CAAM (as the new CEO in June 2020), second-quarter 2021 was the timeline given to me (for the merger). I am happy to say that we are moving forward with it. Nevertheless, regaining Category 1 status for CAAM and undertaking its internal transformation are my priorities,” he tells The Edge when met at CAAM’s new office in Galeria PJH, Putrajaya. The authority has taken up extra office  space in the nearby building and added some 130 people to its initial staff strength of 1,380 in the last six months.

“For me, I highly encourage industry experts or competent individuals to join us. Mavcom, which employs about 60 people, does comprise many industry experts, so they would definitely be welcomed,” he says.

Still, the Mavcom Act needs to be repealed and the CAAM Act amended to incorporate the economic functions, which is being worked on by the legal officers of MoT and CAAM, Voo adds.

Opponents of the proposed merger, however, have questioned the need for the move. The International Air Transport Association (IATA), for one, does not see how the merger of Mavcom and CAAM will help Malaysia’s safety rating.

“Mavcom is the independent regulator of economic and financial matters related to aviation, and has served the Malaysian aviation industry well. The independence of economic regulation should be maintained,” says the IATA’s regional vice-president for Asia-Pacific Conrad Clifford.