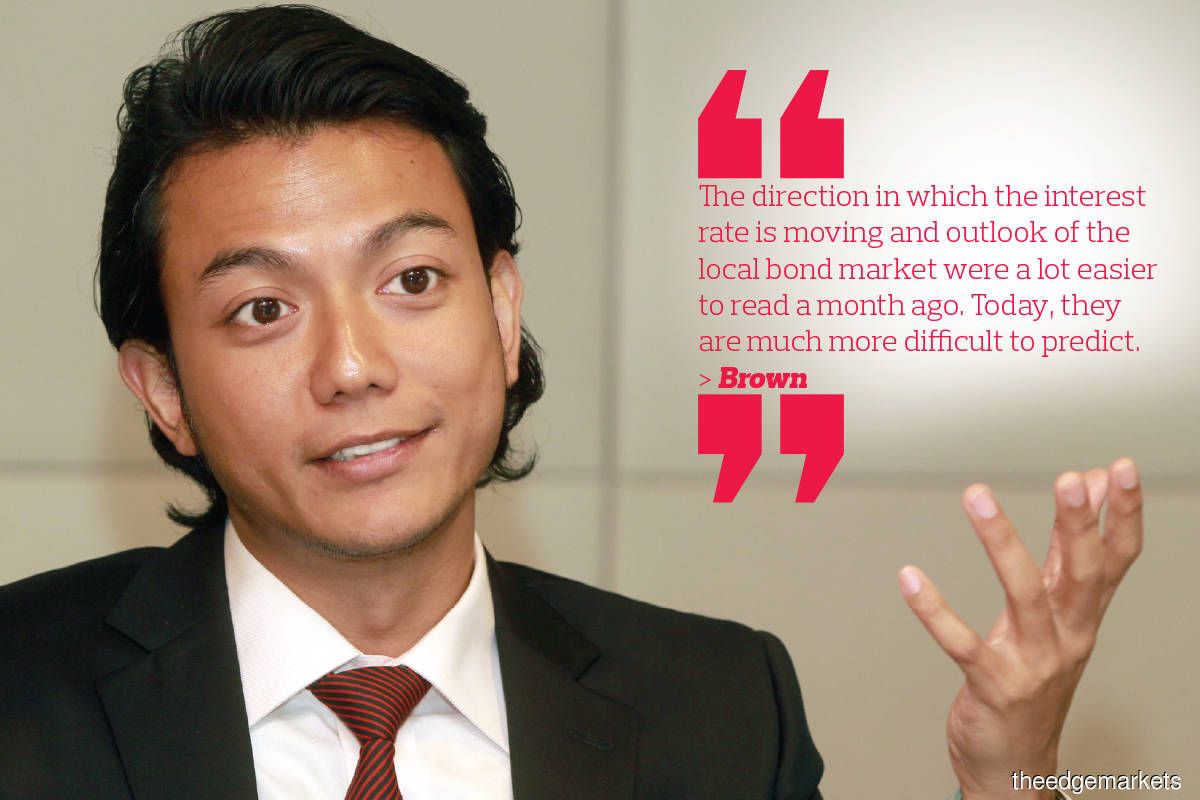 Local bond investors should be more selective in their investments as the evolving economic conditions have made it increasingly challenging to predict interest rate movements. In times like these, they should consider looking at corporate bonds in more defensive sectors to enhance their investment returns, says Daniel Brown, head of fixed income at CGS-CIMB Securities Sdn Bhd.

Brown expects the country’s overnight policy rate (OPR) to stay at its current level of 1.75% in the next six months if the Covid-19 pandemic remains under control. However, there are increasingly mixed views in the market over whether the rate will fall further.

“The expectation that macroeconomic data will weaken is quite clear. Bank Negara Malaysia has been reducing the OPR, both prospectively [ahead of the weaker economic growth] and pre-emptively [to prepare against the weaker outlook],” he says.

“At the current 1.75% rate, however, any argument for lower rates is less clear in the absence of further hard data. The central bank may have reached a point where it will only decide on further rate changes when more hard data comes out.”

Brown believes that an increase in interest rates is possible over the next 12 months, especially if the economy recovers stronger and sooner than expected. When this happens, the rate increase will impact the bond market.

At 1.75%, the OPR is at its lowest since the floor was set in 2004. While such a low rate is necessary to stimulate the country’s economy, it has consequences that could prompt the central bank to increase the rate sooner than expected.

Brown says while these factors are not primary indicators of the direction of the interest rate moving forward, they will have an impact on Bank Negara’s decision. “One such instance would be if the inflation rate rises and consumers’ purchasing power weakens [as a result].”

According to data by the Department of Statistics, the consumer price index (CPI) dropped 2.7% to 117.6 points in April from a month earlier. However, it increased to 117.9 and 118.2 points in May and June respectively.

Bank profits have taken a hit with interest rates at a record low, says Brown. This is exacerbated by the implementation of the six-month loan moratorium beginning April, which is estimated to cost banks RM6.4 billion in losses, as quoted recently by Finance Minister Tengku Datuk Seri Zafrul Abdul Aziz.

“The net interest margin of banks drops as the interest rate falls. This has a huge impact on them,” says Brown.

This was one of the reasons for the downgrade in the credit rating of Malayan Banking Bhd (Maybank) by Fitch Ratings to BBB+ from A- in April. “This is a huge deal, not just for the banks but the entire country,” he points out.

That is because the health of the banking sector is a proxy for the economy, says Brown. Typically, the credit rating of some of the strongest banks, such as Maybank, is closely linked to the sovereign rating.

“Is such a downgrade an indicator of where the country’s sovereign rating is moving ­[towards]? We hope not. The direction in which the interest rate is moving and outlook of the local bond market were a lot easier to read a month ago. Today, they are much more difficult to predict,” he says.

In such an environment, Brown favours the utility and consumer staples sectors, which are more defensive. “These are companies that provide essential products and services that are constantly in demand, such as electricity supply, petrol or gloves,” he says.

He adds that a reputable energy company recently issued a bond with a 3.6% yield, which is attractive compared with the fixed deposit rate of below 2%.

Brown says perpetual bonds (also known as perps) issued to fund public infrastructure projects are also attractive to sophisticated investors with a higher risk appetite. “These are also known as project finance. The money raised is used to build public infrastructure such as railways and toll roads. The government gives these companies concessions and the latter raise funds from the bond market to build those projects. The debts are then paid from the cash flow generated by those projects.

“These bonds are attractive as they are backed by assets. The perps are also secure as institutional investors are involved. The government would need to make sure the bondholders are paid off if something [bad] were to happen. It is a very good space to look at in the medium to long term, especially for high-net-worth investors who are just starting to be familiar with the bond market.”

Brown is neutral on the banking sector as its performance largely depends on the country’s economy moving forward. He is underweight on the property sector even though mortgage rates are low and the number of transactions has increased.

“I think it will be more difficult for people and businesses to get loans from banks as it is likely that credit risk would have risen, especially in some harder-hit sectors. Simultaneously, the demand for loans in certain sectors may not be as strong as consumers and businesses turn more cautious on discretionary spending and business expansion,” says Brown.

Brown says bond prices in general have been high as the OPR has been lowered to 1.75% from 3.25% since March 2019. But investors need not be overly worried about a collapse in bond prices if interest rates were to rise on the back of a stronger-than-expected economic recovery.

He says local bond prices are fairly stable at the moment as the financial instruments are concentrated in the hands of institutional investors. This provides the bond market with stability.

“Institutional investors easily account for 60% of the local bond market and industry players are beginning to recognise the benefits of having a high level of institutional holdings. The disadvantage of such a situation is that the domestic bond market is illiquid. This is one of the main reasons why [international index provider] FTSE Russell is considering removing Malaysian bonds from the FTSE World Government Bond Index (WGBI),” says Brown.

“However, market players realise that the pros of a high level of institutional holdings outstrip the cons. That is why you do not see many discussions about the exclusion of Malaysian bonds from the WGBI recently.”

He adds that the default rate in the bond market is also expected to remain low. “I do not think there is immediate pressure on the default rate. Corporates are likely to restructure and refinance their debts. You will see many of these issuers coming into the market to issue new bonds at lower rates and clear off their old debts with higher rates.

“Even if there are defaults in the local market, they usually do not happen overnight, which would create volatility in the market.”

Daniel Brown, head of fixed income at CGS-CIMB, says the firm offers a wide range of bond instruments to investors. “There are more than 2,000 bonds in the market and investors can trade almost all of them through us. Our trading fee is among the most competitive in the market.”

The minimum amount for individual investors to trade an odd lot is RM250,000 under the existing regulations, he adds. “The minimum size of one lot of corporate bonds in the market is RM5 million. But we can group a few investors together to buy a lot.”

In 2019, the Securities Commission Malaysia launched the Seasoning Framework, which allows retail investors to buy bonds for as low as RM1,000. However, they can only trade those that have been issued for at least 12 months, among other criteria.

Brown says CGS-CIMB is looking forward to introducing seasoned bonds in the next two years. “We also want to list our bond offerings on our online platform iTrade moving forward.”

Meanwhile, the firm has plans to provide new solutions for bonds such as margin trading, online trading and contracts for difference (CFDs) in the next two years. It also intends to offer margin trading so investors can access a wider pool of bonds in the market. Such a service is common in Singapore but has yet to be introduced in Malaysia, he says.

“The main intention of margin trading is to provide investors with greater access to the bond market. It is not so much to let them leverage to enhance returns,” says Brown.

The introduction of bond CFD trading is also in the pipeline, he adds. CFD is a derivative that allows investors to speculate on the market price of the underlying instrument without taking ownership of the instrument itself. It is also traded on margin, which means investors only need to pay a fraction of the price of the underlying security to gain its full exposure.

Brown is aware that there is a negative perception of CFDs among local investors. Such leveraged products are offered by unregulated exchanges in the market, some of which have been blacklisted by the regulators for various reasons.

“We are different. We have a strong risk control policy. And we will only be offering it to high-net-worth individuals. Hopefully, our branding will offer a badge of legitimacy to the product,” he says.

“Our goal is to diversify our offerings. We have equities, fixed income and futures now, and we want to build other products around them.”

Brown says CFDs are accepted in Singapore as investors over there are more sophisticated and aware of the risks involved with trading derivatives.