Find rooms quickly with your smartphone 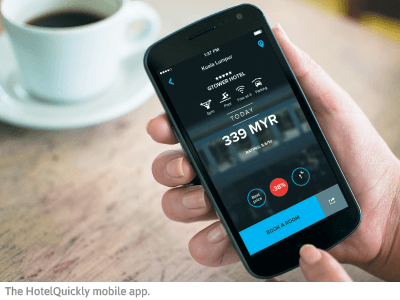 TRAVELLING around the world or even in your own country has never been easier than it is today. But even for those needing to make a quick trip or looking for a last-minute escape, there’s still the dilemma of accommodation. Not only are most hotel rooms unavailable at the last minute, the rates of the rooms are usually also hiked up.

To address this need, in comes HotelQuickly — a last-minute hotel booking app catering especially to the Asia-Pacific region.

A new avenue for spontaneous travel, this “one stop” app promises to offer hotel rates up to an average of 28% cheaper than the best prices available online, for check-in within 48 hours.

Launched in Malaysia recently, the app-only service also announced its partnerships with a network of hotels in 10 different locations throughout the country, including most major cities and popular tourist destinations.

Founder and chief executive officer (CEO), Tomas Laboutka, speaking to The Edge Financial Daily during his visit to Kuala Lumpur in conjunction with the official launch, said,  “Seventy per cent of Malaysians would never leave home without their smartphones — it’s a trend,” commenting on its app-only business model, “It’s used for everything. So why not use it for travel emergencies?”

A serial entrepreneur at only age 29, Laboutka’s resume is a prolific series of ventures and positions, having founded three other ventures in just the past six years and is the co-founder and managing partner of FL Ventures Ltd, a specialist in advising start-ups on how to expand successfully across Europe.

The graduate from the Rotterdam School of Management and the University of Economics in Prague says that he loves everything Asian, from the food to the culture to the business opportunities. In fact, HotelQuickly is based in Hong Kong.

The inspiration behind the idea was his personal liking for spontaneous travel, “We (at HotelQuickly) believe spontaneous travel enriches people’s lives,” said Laboutka, who also serves on the sub-committee for Entrepreneurship of the National Economic Council of the Czech Government.

“We want to bring people last-minute, high-quality hotels with great deals to help bring the spontaneous travel experience to anyone with a cell phone,” he added.

Specially designed for the last-minute traveller in mind, the app differentiates itself by being truly “last minute” — narrowing the booking window down to the same day or the next day, with bookings up to five nights allowed.

This is a deliberate design to distinguish itself from the competition, including online sites such as Agoda, Expedia and Booking.com, providing a targeted service with an attractive discount.

So confident is Laboutka of HotelQuickly’s lowest price claim that the CEO “guarantees” that if users can prove otherwise by drawing comparisons with other online travel agencies, the company is willing to offer a reward or compensate.

The reasoning behind how the service has gotten the hoteliers on board is this: Eager to sell off extra rooms and to improve the hotel’s occupancy, hotels are more than willing to sell off their rooms — even at a lower price.

To avoid backlash of unfairness, however, discretion is needed. As such, HotelQuickly’s model provides a win-win situation for both travellers and hoteliers, “It is a transaction between just three parties; the user, the hotel, and HotelQuickly,” explained Laboutka.

The app-only function means that technically the prices are not displayed publicly online, but only to the specific user, and may even be gone once it’s booked by the user.  This to an extent, prevents the frustration of an unhappy traveller who booked months in advance and paid the full price.

The exchange is of course that the last-minute traveller may not get a specific hotel of his or her choice, but at the very least they are promised a good bargain. 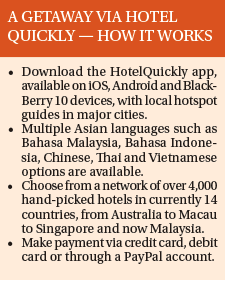 It goes without saying, that every venture is a risk, and with that risk comes challenges.

“One of the biggest challenges of launching in Malaysia is that since we started the business from scratch, HotelQuickly is relatively unknown,” Laboutka said, “But we’ve seen great response so far.”

As far as future plans go, he says that the company won’t be venturing into other travel businesses — not yet at least.

“We’d like to do this (HotelQuickly) right first,” he says with a laugh. “Then we’ll see.”