Find and tell your stories 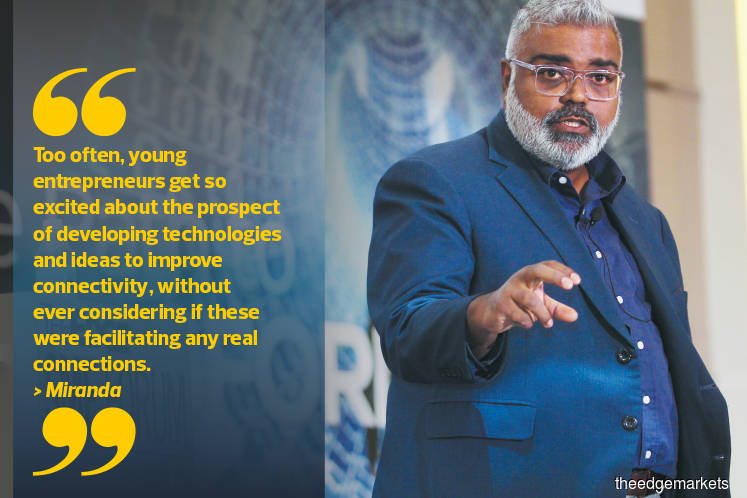 Raymond Miranda and his siblings worried for their ageing mother. Fiercely independent, she had refused to move in with any of them. She insisted on living alone in the marital home even after her husband died.

As a compromise, they thought it would be a good idea for mom to have a serviceable mobile phone close at hand. That way, her children were just a phone call or WhatsApp message away.

To the frustration of the siblings, mom refused to have anything to do with the device. It got to the point where they would gift her a new device almost yearly, only for her to keep it locked away in a drawer somewhere. She had lived her whole life without the thing and, as far as she was concerned, had no use for it now.

“But all that changed when my brother and his wife had twins,” said Miranda. His mother took care of the twins for the first five years of their lives and those were probably the best years of her life, he added.

The founder and CEO of coaching consultancy Labora[s]tory Sdn Bhd was speaking to a full house at The Edge SME Forum 2019.

“When the twins were about 5½ years old, it was time for them to move away, quite a distance away, in fact. We all knew it would be difficult for mom as she would miss them terribly,” said Miranda.

“Every now and again, I would sit next to her, open the Facebook app on my phone and show her pictures of the twins. She got to see what they were up to. But more importantly, she realised just how much of their lives she was missing. In that moment, she finally began to seriously entertain the idea of owning a smartphone, just so she could follow their lives.”

Unsurprisingly, Miranda was presenting a talk entitled “Story: When your fear is data for transformation”. His story perfectly encapsulated one of the key themes of his talk — connectivity does not mean connection.

“My mother was right. It was only when she was missing those connections did she take the effort to seek out connectivity. You see, we tend to forget that we are driven to connect with fellow human beings. But too often, young entrepreneurs get so excited about the prospect of developing technologies and ideas to improve connectivity, without ever considering if these were facilitating any real connections,” he said.

People tend to assume that both concepts are interchangeable, when in fact, “connectivity” is more akin to chaos. “We have for the longest time misinterpreted the word ‘connectivity’. We think it brings us together but actually, what it does is show us all the options and possibilities that exist around us and we end up feeling compelled to choose from all these options,” said Miranda.

He also challenged what he saw as the prevailing “Silicon Valley start-up model”. Silicon Valley has mastered the art of problem-solving and finding solutions, he said. However, the model places a heavy premium of so-called “scalability”, that is, being quick to grow a solution or product into an all-conquering global phenomenon.

The downside, Miranda contended, is a very high failure rate for these young businesses and founders, not to mention the huge amounts of investment that go up in smoke.

Instead, he called on businesses, particularly young companies and start-ups in Malaysia, to consider what he referred to as the “Berlin start-up model”. “German small business culture is steeped in the local community. There is an unspoken understanding that one simply does not go into debt right out of the gate or rush to seek investment dollars. The culture very much revolves around family members and the local community supporting local businesses,” said Miranda, who had spent the last two months in Berlin and other parts of Europe engaging with the vibrant start-up community.

So in many ways, the Silicon Valley model is the antithesis of the Berlin model. That said, this clash of cultures has been very good for German businesses, Miranda suggested, because he found that a number of German entrepreneurs did wish that they had greater access to venture funding and the scalability that it entails. By and large, however, he believes that German SMEs still place a heavy emphasis on local and regional problem-solving, as opposed to scaling up as quickly as possible.

Miranda said local start-ups could stand to benefit from the measured approach of their German counterparts. “I think we have bought into the narrative that the only way for start-ups to really move is with venture funding. That narrative has to change because too many start-ups are dying as a result.

“What we have in Malaysia is too many young people focusing on delivering the most amazing investment pitches. They spend months preparing themselves and go from one pitch to the next, all without even running a business. This is such a tragedy because so much taxpayer money goes into funding these start-ups.”