Finally, Golden Plus to be delisted 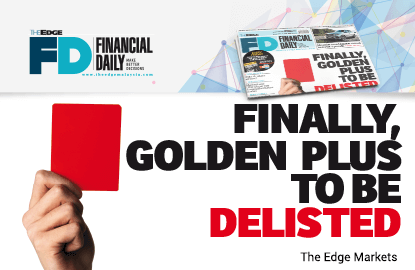 KUALA LUMPUR: Bursa Malaysia has finally decided to remove Golden Plus Holdings Bhd (GPlus), a property company which is controlled by businessman Teh Soon Seng who now resides in Hong Kong and Shanghai, from the listing on the local stock exchange.

The stock been suspended from trading since August 2009, due to failure to release its annual report for the financial year ended Dec 31, 2008 (FY08). Subsequently, it was not able to submit audited annual accounts the following years.

The delay action taken by regulators on GPlus has raised eyebrows over the years. Apart from the failure of announcing its financial accounts, Bursa reprimanded GPlus for inaccurate disclosures in its annual audited accounts for FY08 and FY09, failure of making immediate disclosures of material information and recurring related-party transactions.

Bursa said GPlus had blamed the failure of producing the financial statements of its subsidiary Yanfull Investments Ltd on not being able to finalise them into the subsidiaries’ accounts. Yanfull, however, claimed that its accounts were improperly prepared by the parent prior to the consolidation into GPlus’s annual audited accounts for FY08 and FY09.

Bursa said GPlus was being untruthful in those audited accounts, saying that Moore Stephens AC had audited the company and its subsidiaries’ accounts, but the exchange found that the audit firm and its member firms were not involved in the audit. The audit firm also did not issue any audit reports on the financial statements of the subsidiaries.

In a statement yesterday, Bursa said it reprimanded and fined 10 of the firm’s past and current directors a total of RM3.25 million for violating the Main Market Listing Requirements.

“The decision was made after consideration of all facts and circumstances, and evidence procured including arising from the enforcement proceedings against GPlus and its directors for failure to ensure timely announcements/issuances of the outstanding financial statements, and in view that there was no certainty as to when and whether GPlus would announce/issue these outstanding financial statements,” said the regulator.

To recap, Bursa served GPlus with a sealed court order to direct the property firm to appoint PricewaterhouseCoopers Advisory Services Sdn Bhd (PwC) as special auditors in December 2010. The special audit was to review the affairs of GPlus and its subsidiaries for the period between January 2006 and May 2010.

The businessman, former owner of controversial timber firm Aokam Perdana Bhd, was appointed as a corporate representative of GPlus.

Teh was once wanted by the Malaysian police and the Securities Commission Malaysia (SC), who were looking into allegations of a misappropriation of RM55 million belonging to Aokam. The businessman was also suspected of being involved in short-selling of Aokam shares. He was released after a two-day interview by the regulators in 2003; the SC’s investigation revealed “no evidence for action to be taken against him”.