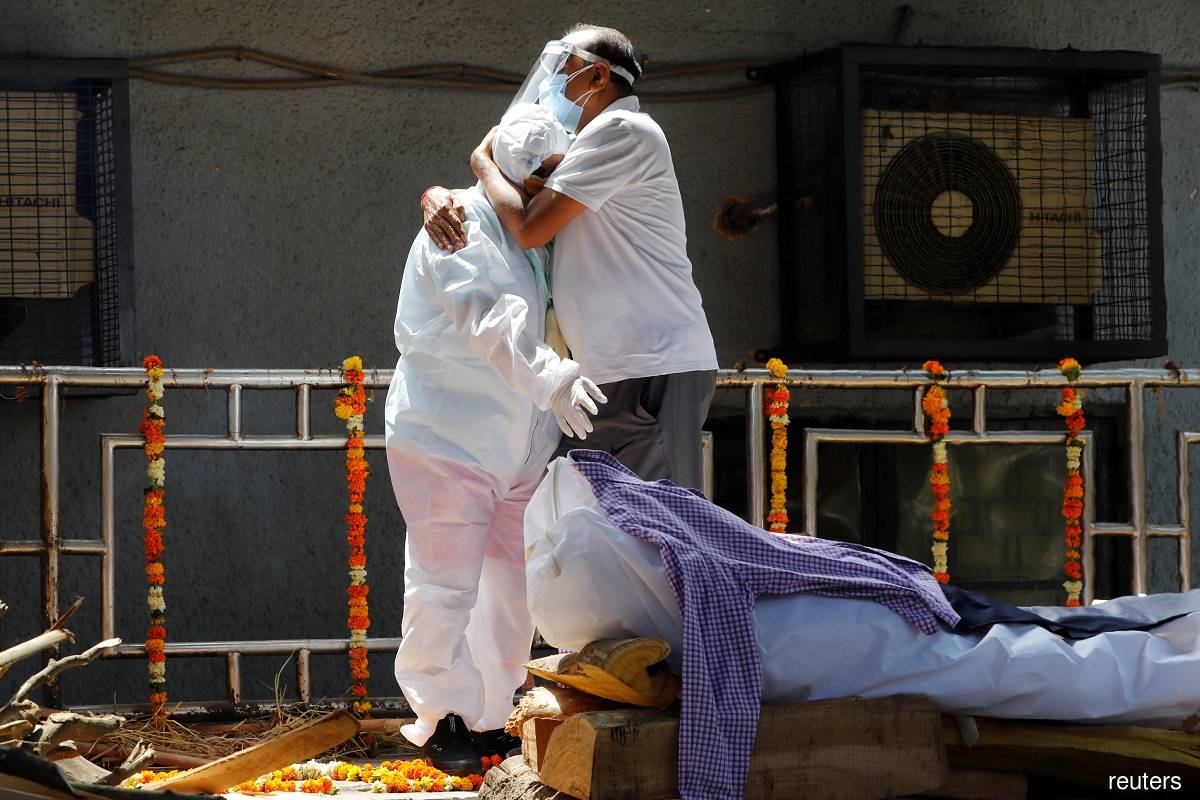 LUCKNOW (April 21): As Sushil Kumar Srivastava's breathlessness worsened, his family bundled the 70-year-old into a car and drove him to a hospital in the capital of India's northern Uttar Pradesh state, where he tested positive for the coronavirus.

After the private hospital turned the retired government official away because it did not have any vacant bed, his son Ashish brought two oxygen cylinders and drove his father on a hunt for a hospital that could admit him.

"All the hospitals asked for a referral letter from the chief medical officer's (CMO) office," Ashish said, referring to the top healthcare official of the city of some 3.5 million people.

At the office, Ashish said nobody helped him. "I was shooed away by the police," he said, when he tried to meet the CMO.

Three days later, Ashish said someone from the government called him offering a bed for his father — a day after Srivastava had passed away at a private clinic.

The family's ordeal reflects the worsening Covid-19 crisis in Uttar Pradesh, where people are battling bureaucracy along with the disease.

To get a Covid-19 bed in Lucknow, families said they need to show the result of an RT-PCR test, which are already in short supply.

Next, patients are required to register with the CMO's office, which then forwards the request to the Integrated Command Control Centre for Covid-19 management that makes the final bed allocation, a government official said.

A state government spokesman on Wednesday told Reuters that authorities were planning to end the CMO referral system this week, and instead appoint officials at every Covid-19 hospital to assess whether a patient needed to be admitted.

The cumbersome process has come under criticism, including from the state's Human Rights Commission that has asked the government to ditch the referral rule.

"There are expert doctors in hospitals who can decide if the patient needs to be admitted or not," the commission said on Tuesday. "This referral letter system is not required."

Having already become the country currently being hit hardest by the pandemic, India has recorded more than 200,000 new Covid-19 cases daily for the last seven days, marking the world's steepest rise this month, and there is no sign yet that the second wave of infections is going to peak soon.

The state government has said it is turning several hospitals into Covid-19-only facilities and adding more beds. It did not respond to questions from Reuters.

This week, local TV news channels aired footage of a young man lying on the road to block the CMO's car in his desperation to get a letter for an ailing relative.

Patients need to show an RT-PCR test confirming infection before being given a referral letter.

But these tests are increasingly hard to access for most patients, with long queues outside hospitals and clinics overburdened due to the surge in infections.

"Getting an RT-PCR done in UP (Uttar Pradesh) is next to impossible," said journalist Shreya Jai, whose family members had to wait for a week to get a rapid antigen test.

Many Lucknow labs are working with less than half their staff, the rest sickened by the virus, a lab worker said, asking not to be named.

The state government has said that nearly 230 private and state-run labs are being used for coronavirus testing.

On Monday, the state government led by Yogi Adityanath, who himself is currently down with Covid-19, was pilloried for its handling of the crisis by a regional court.

"It is a shame that while the government knew of the magnitude of the second wave, it never planned things in advance," the state's Allahabad High Court said.

In the Srivastava household, in a middle-class neighbourhood in central Lucknow, there is anger and sadness after the cremation of the head of the family.

"I blame the officers sitting in air-conditioned chambers for my father's death," said 39-year-old Ashish, who himself is now Covid-19 positive.