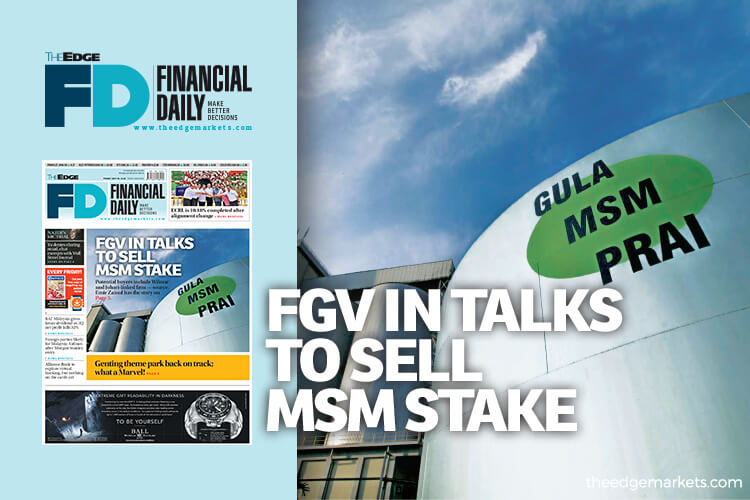 KUALA LUMPUR: FGV Holdings Bhd is in talks — including with international players in the sugar industry — to dispose of part of its 51% strategic stake in refined sugar producer MSM Malaysia Holdings Bhd.

The Edge Financial Daily was told by a source that there are at least four companies that are eyeing the block of shares.

One of them, the source said, is JAG Capital Sdn Bhd, which is an investment holding company linked to the family of former second finance minister Datuk Seri Johari Abdul Ghani.

The others are Wilmar International Ltd, the Singapore-based agribusiness firm owned by Kuok Group; an unnamed Indonesian company and another unnamed Chinese outfit.

Following the disposal, FGV and the buyer of the shares will likely hold approximately the same shareholding in MSM. Principally, MSM operates the sugar business of FGV.

In response to questions from The Edge Financial Daily on the matter, FGV acknowledged that it is exploring potential collaborations with international players in the sugar industry, both in the upstream and downstream sectors.

“These potential collaborations include strategic alliances. Discussions are still at a preliminary stage and both FGV and MSM will make the relevant announcements at the appropriate time,” it said.

Note that FGV had bought MSM, which commands 60% of the domestic sugar market, from PPB Group Bhd for RM1.22 billion cash in 2010. This marked the exit of Robert Kuok — once dubbed the Sugar King — from the local sugar refining business.

FGV listed MSM in June 2011 at an initial public offering price of RM3.38 and raised RM422 million, one year before FGV’s own flotation exercise.

PPB is the second largest shareholder of Wilmar, with an 18.5% interest.

Founded in 1991, Wilmar is ranked among the largest listed companies by market capitalisation on the Singapore Exchange.

“Wilmar operates an integrated sugar business across the entire value chain from sugar cane and beet plantations to the sweeteners aisle in supermarkets. In between, we operate sugar mills, cogeneration plants, ethanol distilleries, and sugar refineries across the globe, linking key origins and destinations through a market-leading merchandising team headquartered in Singapore,” Wilmar stated on its website.

In Malaysia, the domestic sugar industry is currently dominated by MSM and Central Sugars Refinery Sdn Bhd, which rely heavily on the import of raw sugar.

It was reported last month that the outlook for the sugar industry for domestic sugar refiners may not be as sweet as before given the change in the operating landscape that features possibly rising competition from imported sugar.

Furthermore, local refiners may also be hit by the movements of international raw sugar prices which will eat into their profit margins due to higher input costs.

In fact, MSM group chairman Datuk Wira Azhar Abdul Hamid had previously warned that the current environment may not look good for the company. He said the import of sugar, which the government has allowed since early last month, is causing stiff competition in the local market and Azhar expects this to take a toll on MSM’s financial performance.

Meanwhile, FGV, which has been embroiled in a tussle with its shareholders on directors’ remuneration, had previously mentioned that it is working on a three-year transformation plan to rationalise and divest its non-performing businesses and to focus on maximising returns from performing businesses.

Most recently, FGV sold its 100% equity interest in FGV China Oils Ltd (FGVCO) for RM100 million in cash to Grand Industrial Holdings Co Ltd. FGVCO, which handled FGV’s edible oils business for the China market, has been incurring losses since it was acquired in 2015 due to market disparity arising from competition coming from regional suppliers.

FGV said, however, the disposal will not have any material impact on its current China business or its strategic plans for the China market moving forward.