Fewer but bigger LRT3 packages to go around 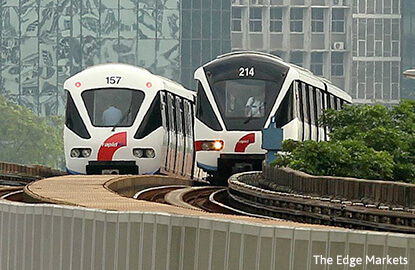 THE RM9 billion worth of jobs to be awarded under the third light rail transit (LRT) line project by the end of the year has been one of the bigger catalysts in the pipeline for the construction industry.

According to industry sources, of the 96 companies that are pre-qualified, about 20 are public-listed firms that are qualified for infrastructure tenders. However, there are only three infrastructure packages up for grabs in the open category (as opposed to the bumiputera category), which means that most will come away empty-handed.

“That is what we understand. There aren’t many packages and roughly half of them are restricted to bumiputera companies, so we (listed companies) can tender for only a handful. However, there is still be a chance that the packages can be broken into smaller ones,” says an industry executive with a public-listed company that is pre-qualified.

LRT3, which will be owned and developed by Prasarana Malaysia Bhd, will span 37km from Bandar Utama to Klang, with 26 stations. Malaysian Resources Corp Bhd, together with George Kent Bhd, was appointed the project delivery partner in September last year.

It is understood that the rationale behind the LRT3 project being broken into fewer infrastructure packages is to minimise interconnections that can be costly and may cause delays.

In a nutshell, there will be fewer slices of the pie to go around for LRT3. On the bright side, the size of the packages will be relatively large.

Note that the infrastructure packages include the construction of stations, viaduct guideways, park-and-ride facilities and train depots.

While the big boys like IJM and Gamuda have the size advantage, the small-cap firms will have the most to gain if they can secure one of the packages.

Of special interest to investors are Naim, TSR Capital and Zecon. According to sources, they are the only three companies that are qualified for packages under the bumiputera category. They will have to compete with a host of relatively small private companies that are also pre-qualified.

However, there are still some strong challengers among the unlisted bumiputera companies — for example, Apex Communications Sdn Bhd, which recently won a RM1.62 billion systems package for the MRT2 line, with POSCO Engineering Co Ltd and Hyundai Rotem Co as consortium partners.

Apex Communications is 99.9%-controlled by Tan Sri Abdullah Ali, and according to Companies Commission of Malaysia records, the company generated RM207 million in revenue in FY2014 ended Dec 31.

Another unlisted company to look out for is Acre Works Sdn Bhd, which does a lot of prefabricated concrete parts. It posted revenue of RM183.89 million in FY2014 ended Dec 31.

Still, Naim, TSR Capital and Zecon stand a very good chance in the bumiputera category. Naim, in particular — with a market capitalisation of RM426.5 million — is easily the largest in the category, which puts it in a good position to bag one job.

Note that there are six bumiputera infrastructure packages in total, which gives the three a much better chance than their peers in the open category.

Bear in mind that each company is limited to only one package.

The exact value of each package is difficult to ascertain at this stage as the tender documents have not yet been released. Note that the RM9 billion value of the packages includes the systems and infrastructure jobs.

Looking ahead, the project is not an immediate catalyst for the stocks mentioned. Newsflow from the LRT3 project should start to trickle in around the third and fourth quarters — the planned deadline to award most of the packages.