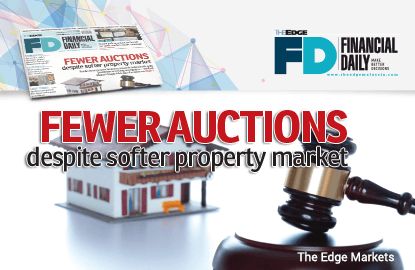 This article first appeared in The Edge Financial Daily, on June 27, 2016.

KUALA LUMPUR: Auctioneers are seeing a decline in the number of properties being auctioned off, despite the expectation of more houses or shoplots going under the hammer in the current challenging economic environment.

However, the drop in the number of properties being auctioned off is not a sign of recovery in the domestic property market.

“When people see posters on bank auctions everywhere, they assume that the economy is doing bad and the number of auctions is getting higher ... this is the wrong perception. In reality, the number of cases has been falling,” said Ng Chan Mau & Co Sdn Bhd licensed auctioneer Foong Chon Wai .

Foong notices that auction cases have been lesser than before, noting that the average number of cases the company gets per month has declined about 30% year-on-year.

“The number of total auction cases has also fallen from 1,000 per month to around 600 per month now.

An Ehsan Auctioneers Sdn Bhd official concurs that there is a lower number of properties being auctioned off so far this year, compared with previous years.

“For the first half of 2016, we didn’t get as many cases as we did in previous years. I am sure we are not the only company that is experiencing this.

“In fact, numbers started declining in 2014. We just did an auction for AmBank for about 40 over properties, compared with previous years when we had around 120 properties up for auction,” said the official.

He added that demand for these properties, which are auctioned off, is still healthy, especially for landed and office units in good locations.

While there is a correlation between the economic performance and the number of property auction cases seen, the drop in the number of cases is not an indication of an improving domestic property market, according to the industry players.

Foong attributed the decline in properties being auctioned off partly to greater leniency provided by banks to individuals facing problems servicing their mortgages.

“The decline in the number of auction cases is due to a few factors. One is that the government has been promoting the Credit Counselling and Debt Management Agency (AKPK), a government agency which provides debt counselling services, thus reducing default rates.

According to him, AKPK would help to restructure the mortages of financially stressed mortgage holders with, for instance, lower monthly payments by extending the loan tenure.

Foong said individuals are also able to withdraw their savings with the Employees Provident Fund to pay off their mortgages, which has also helped to reduce loan defaults in the banking sector, hence less properties go under the hammer.

Malaysia has made continuous improvement in housing loan default rates, as impaired housing loans made up 1.1% of total loans approved in 2015, compared with 1.3% and 1.5% in 2014 and 2013 respectively.

Meanwhile, he said that the tighter lending policies imposed by BNM, one of the cooling measures aimed at curbing speculative activity in the local property market, had managed to reduce the number of default cases.

However, Foong noted that the tighter lending policies had affected demand for high-end properties priced at RM1 million and above.

“Demand for auctioned properties priced above RM1 million is moving very slowly, mainly because of the tighter lending guidelines, which are the main issue currently.

“However, demand for affordable properties priced below RM300,000 is still very healthy and is on an uptrend. We expect demand for this class of properties to remain healthy going forward,” said Foong.

Looking ahead, Foong opines that there should be better clarity after the second quarter of 2017.

“For the past 10 years, property prices have been increasing and many speculators have made good money. So they have savings, a cushion of sorts, to cover their payments for two to three years.

“We expect that by the second quarter of 2017, we will be able to see a clearer picture when they have exhausted their savings,” he said.