Feud between Protasco and Tey intensifies 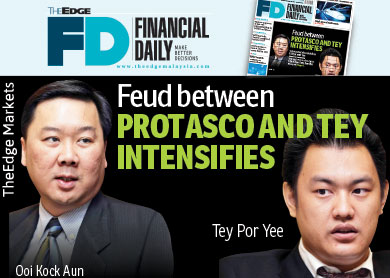 KUALA LUMPUR: The feud between Protasco Bhd and its substantial shareholder Tey Por Yee seems to have intensified.

Protasco announced to Bursa Malaysia yesterday that it had received a notice from two substantial shareholders, who collectively hold about a 10.51% equity interest in the company, requisitioning for an extraordinary general meeting to remove Tey and Ooi Kock Aun from the board as non-executive directors with immediate effect.

The call to remove Tey and Ooi came hot on the heels of a legal suit filed by Protasco against PT Anglo Slavic Utama (PT ASU), as well as the duo for damages arising from a breach of contract with regard to the purchase of an equity interest in PT Anglo Slavic Indonesia (PT ASI) from PT ASU.

The shareholders, who wanted to remove the duo, are UOBM Nominees (Tempatan) Sdn Bhd and Tan Heng Kui. UOBM and Tan own 8.99% and 1.52% stakes in the company, respectively, according to yesterday’s announcement. Tey is also a substantial shareholder with direct and indirect stakes of 16.68% in Protasco, while Ooi owns 1.61%.

“A board of directors meeting will be called to discuss the matter and relevant announcement(s) will be made in due course,” said Protasco.

On the legal suit filed last month, Protasco named PT ASU as the first defendant, while Tey and Ooi were named as the second and third defendants, respectively.

According to a separate filing with Bursa Malaysia, Protasco said it was claiming back the purchase price of US$22 million that had been paid under the restated sale and purchase agreement dated Jan 28 this year, and damages arising from the breach of contract.

Protasco also claimed in the filing that naming Tey and Ooi as defendants in the suit was premised on the breach of their fiduciary and statutory duties, including the duty to disclose their interests in the transaction, conspiracy to defraud Protasco and the “making of secret profit”.

Both Tey and Ooi will hold a press conference today to defend their case and to provide updates on the latest development in the legal suit.

Tey told reporters yesterday that the memorandum of understanding (MoU) between Nexgram and Protasco on a proposed property development in Cyberjaya, Selangor, had lapsed.

He told reporters after Nexgram’s annual general meeting that the MoU had lapsed simply because Protasco had failed to revert on the matter within the required timeframe.

“Their (Protasco) speed cannot match with what we want, that’s why we have to choose other company,” said Tey, who controls a 24.6% stake in Nexgram.

He stressed that a company should not have any preference even if was common shareholdings. “We have to follow a very good governance, especially in choosing which company as our partner,” he said.

Tey said they signed the MoU few months ago and that the partners should have come back to them within a period of time.

“But they can’t give us what we want; that’s why we have to choose other partners. In future, if they can give us something which is fast and up to the mark, then we may consider [them] again,” he explained.