Fernandes: Absurd that M’sia does not have LCCTs 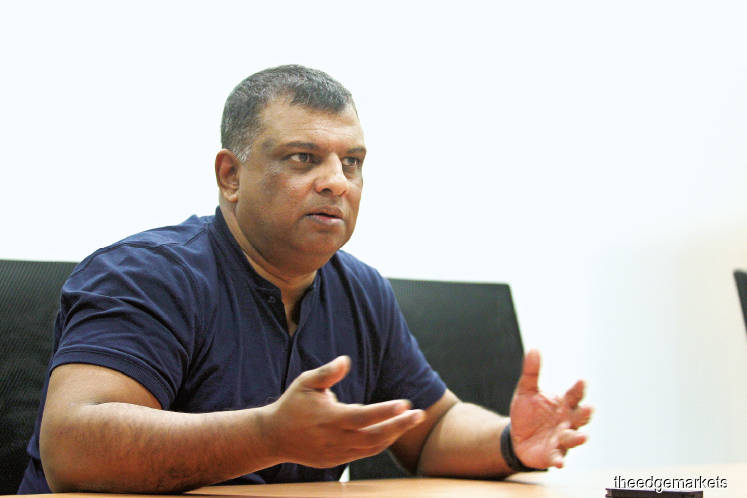 Fernandes noted that a better alignment of interests between stakeholders is crucial to ensure that Malaysia remains a preferred aviation hub. The Edge file photo

Fernandes pointed out that in Malaysia, LCCs account for 57% and 51% of domestic and international flights respectively.

Globally, LCCs expanded by 8% last year, close to triple the 3% growth of full-service carriers. This growth is even more impressive in Asia, especially Southeast Asia, where LCCs are growing by 16% and now account for 50% of air travel, he said.

“Yet it is absurd that Malaysia does not have any dedicated LCCTs. At klia2, AirAsia alone accounts for more than 90% of the total passenger traffic,” he wrote in his LinkedIn post yesterday.

“If Malaysia is to remain competitive, there is an urgent need for the development of dedicated LCCTs, especially at key hubs in Kuala Lumpur, Penang and Kota Kinabalu,” he said.

He hit out at airport operator Malaysia Airports Holdings Bhd (MAHB) for refusing to embrace the LCC model despite having the largest low-cost airline in Asia — AirAsia — as its main user.

“They (MAHB) are abusing their monopolistic position in the market by impeding the growth of the LCC segment in Malaysia. The lack of support from the aviation authorities to boost low-cost travel is disappointing, to say the least. There is a huge misalignment of interests between MAHB and airlines.

“Similar to other industries, there should be a clear distinction between premium and price-sensitive segments, even for airports,” he said.

Fernandes noted that a better alignment of interests between airlines, airports and authorities is crucial to ensure that Malaysia remains a preferred aviation hub.

“This can only be achieved if all stakeholders share the same understanding and appreciation of the LCC model, just like Japan and many other countries in the world.

“Sadly, such appreciation for the LCC model by Japan and other countries is not shared by the Malaysian authorities,” he said.

Commending Japan on the opening of Terminal 2 at Nagoya Chubu Centrair International Airport on Sept 20, Fernandes said the “simple yet hi-tech terminal” is an outcome of a collaborative partnership between the government and major stakeholders.

“Since the initial stage of development, the authorities in Japan have worked closely with major low-cost airlines including AirAsia, to ensure that everyone’s business needs are well addressed.

“I strongly believe that a firm understanding and appreciation of the LCC model among key stakeholders are pivotal in ensuring the success of an LCCT. After all, an airport can hardly be relevant and functional if the needs of airlines and passengers are not taken care of,” he wrote.

The long-standing feud between AirAsia and MAHB is widely known. But in recent times, the tension has heightened after the airport operator launched several lawsuits against AirAsia and its associate AirAsia X Bhd to recover overdue passenger service charge (PSC) payments, as well as for defamation over three online articles linked to the charges.

Fernandes also commended Nagoya Airport for “facilitating airlines that want to promote their brands at strategic areas at the terminal”.

“This reflects how much the airport operator values the partnership they have with airlines. This symbiotic relationship will at the end of the day help all parties involved. In Malaysia, branding at the airports is expensive,” he said.

Fernandes cited the cost of building klia2. “[It] was initially estimated to be RM1.7 billion, but eventually blew up to RM4 billion due to the expansion of [the] commercial and retail area, making up 12% of the total space at klia2. As a result, the construction cost per 1,000 sq m for klia2 is as high as 76% of the cost to build Kuala Lumpur International Airport,” he said.

He said airlines are also offered business-friendly rates at Nagoya Terminal 2 to run their businesses, from aircraft operation to branding. For example, the cost for AirAsia to operate an A320 from Nagoya’s Terminal 2 is only half the cost compared with Terminal 1.

“Nagoya is not the sole example. The low-cost Terminal 3 at Narita Airport and Terminal 2 at Kansai Airport which were opened a few years ago, are other gleaming illustrations of LCCTs that were done right,” he added.

Closer to home, Fernandes pointed to countries like Indonesia and Thailand that had invested in LCCTs. “In Indonesia, Terminal 2 at Soekarno Hatta International Airport is dedicated for LCCs, while the Thai authorities are developing an aviation complex in Utapao, which includes a dedicated LCCT.”