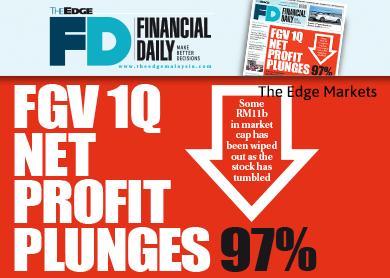 The company, whose share price slid to a record low of RM2.01 yesterday, blames the poor financial results on the flash floods last year and early this year that affected half of it plantations and weak crude palm oil (CPO) prices.

In comparison, the group posted a net profit of RM143.63 million, or 3.9 sen per share in the previous corresponding quarter.

This is the second worst performing quarter since FGV was listed on Bursa Malaysia in June 2012. The worst quarter was 3QFY14 when it dipped into the red with a net loss of RM9.3 million.

In a statement, FGV attributed the dismal earnings in 1QFY15 to lower fresh fruit bunch (FFB) production and the downward trend in CPO prices that has hit most plantation-based industry players.

FGV Group president and chief executive officer Datuk Mohd Emir Mavani Abdullah said severe flooding at the end of 2014 and early 2015 that occurred on the east coast of Peninsular Malaysia had impacted the company.

He said as half of its plantations are located in the three most affected states, the harvesting and transport of FFB to nearby mills were disrupted. As a result, FFB production volume dropped 20% to 930,000 tonnes, from 1.159 million tonnes in the previous corresponding quarter.

Emir, whose employment contract will end in July, stressed that it has been challenging for all plantation companies.

“As it is cyclical, crop production is at its lowest and the same goes for other companies too. In order to remain resilient during this period and to actively offset volatile CPO prices, we are focused on delivering our aggressive improvement and transformation plans in the near term,” he said.

Simply put, FGV’s earnings are even less than its peers who have smaller plantation areas and have also suffered from weak CPO prices. For the quarter ended March, IJM Plantations Bhd’s net profit was RM10.08 million, that of Hap Seng Plantations Bhd was RM21.49 million with Kuala Lumpur Kepong Bhd at RM222.5 million.

FGV’s share price skidded to a record low of RM2 yesterday with a market capitalisation of RM7.37 billion, less than half of its initial public offering (IPO) price of RM4.55. Some RM11 billion in market capitalisation has been wiped out as the stock has tumbled from its peak of RM5.05 in July 2012.

The listing exercise was said to be a channel for “anak Felda” to directly participate in FGV’s future growth. Many smallholders are believed to have taken up loans to subscribe for the IPO.

Emir said FGV has embarked on a concerted effort to enhance revenue generation by establishing a new business model at the start of 2015, hinging on tolling arrangement.

As for FGV’s sugar cluster, profit continued on a healthy uptrend. The cluster recorded profits of RM92 million, an increase of 17% year-on-year.

Emir said at an operational level, the group is pushing forward with continued improvement efforts to contain costs and enhance productivity in estates and factories.

“Among the cost optimisation programmes started in 2015, a core part is renegotiating better value contracts with vendors,” he said. 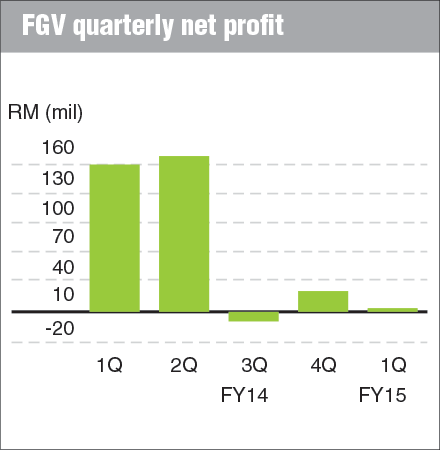