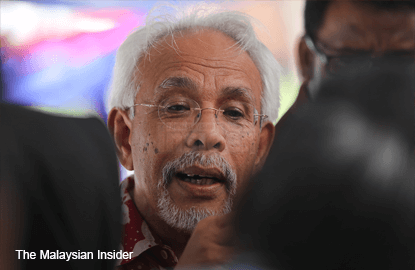 (Dec 3): Tan Sri Shahrir Samad refused to accept a memorandum from a group of activists on the National Security Council (NSC) Bill in parliament, saying he felt insulted by a remark from Datuk Ambiga Sreenevasan.

The Barisan Nasional (BN) Backbenchers Club chairman was approached by the group which wanted the bill’s passage stopped.

But he appeared piqued when Ambiga, president of National Human Rights Society of Malaysia, asked if he really cared for the people.

She asked this after Shahrir seemed hesitant to arrange a meeting between BN backbenchers and the activists about the bill.

“You said I don't care for the people. I'm not going to stand here and be insulted by you,” Shahrir said before handing back the memorandum to Ambiga and entering the House.

Deputy Education Minister Datuk Mary Yap also snubbed the handing over of the memorandum as she walked right past the activists waiting at the Dewan Rakyat entrance.

They handed the memorandum to the lawmakers demanding the bill be voted out and withdrawn.

“It will change Malaysia forever,” the coalition said. – The Malaysian Insider