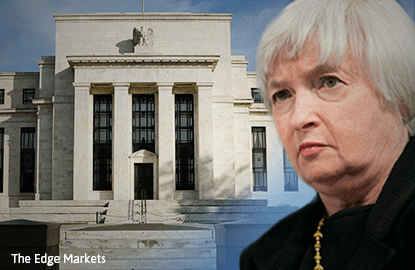 WASHINGTON (Jan 28): The U.S. Federal Reserve kept interest rates unchanged on Wednesday and said it was "closely monitoring" global economic and financial developments, signaling it had accounted for a stock market selloff but wasn't ready to abandon a plan to tighten monetary policy this year.

The decision by the central bank's rate-setting committee was widely expected after a month-long plunge in U.S. and world equities raised concerns an abrupt global slowdown could drag on U.S. growth.

Fed policymakers said the economy was still on track for moderate growth and a stronger labor market even with "gradual" rate increases, suggesting its concern about global events had diminished but not squashed chances of a rate hike in March.

"The committee is closely monitoring global economic and financial developments and is assessing their implications for the labor market and inflation," the Fed said in its policy statement following a two-day meeting.

Wall Street fell after the statement, with the Standard & Poor's 500 index closing down more than 1 percent. Prices for U.S. Treasuries were mixed, while the dollar extended losses against a basket of currencies.

In an indication the Fed was taking global risks seriously, a prior reference to the risks to the economic outlook being "balanced" was removed from its statement. Instead, it said it was weighing how the global economy and financial markets could affect the outlook.

"It is clear that several FOMC members have become more worried," said Harm Bandholz, an economist at Unicredit in New York, referring to the Fed's rate-setting Federal Open Market Committee.

Shrugging off economic weakness in China, Japan and Europe, the Fed last month raised its key overnight lending rate by a quarter point to a range of 0.25 percent to 0.50 percent and issued upbeat economic forecasts that suggested four additional hikes this year.

Wall Street's top banks, however, expect only three rate increases before the end of the year, according to a Reuters poll released after the Fed's statement on Wednesday. That was in line with expectations earlier in January.

Investors are betting on one quarter-point rate increase in 2016.

Prices for Fed funds futures on Wednesday showed traders had pushed back bets for the next rate hike to July from June and modestly trimmed bets on a March hike.

"The Fed has maintained its composure in the face of global pressures," said Joe Manimbo, an analyst at Western Union Business Solutions.

U.S. exports took a hit last year, largely due to the impact of a strong dollar, but consumer spending accelerated and overall employment surged by 292,000 jobs in December.

The Fed said on Wednesday that a range of recent labor market indicators, including "strong" job gains, pointed to some additional firming in the job market.

Oil prices have also plummeted this year, which could keep U.S. inflation below the Fed's 2 percent target for longer, but the central bank said it still expects the downward inflationary pressure from lower energy and import prices to prove temporary.

Policymakers will be able to sift through the January and February U.S. employment reports before their next policy meeting in March.