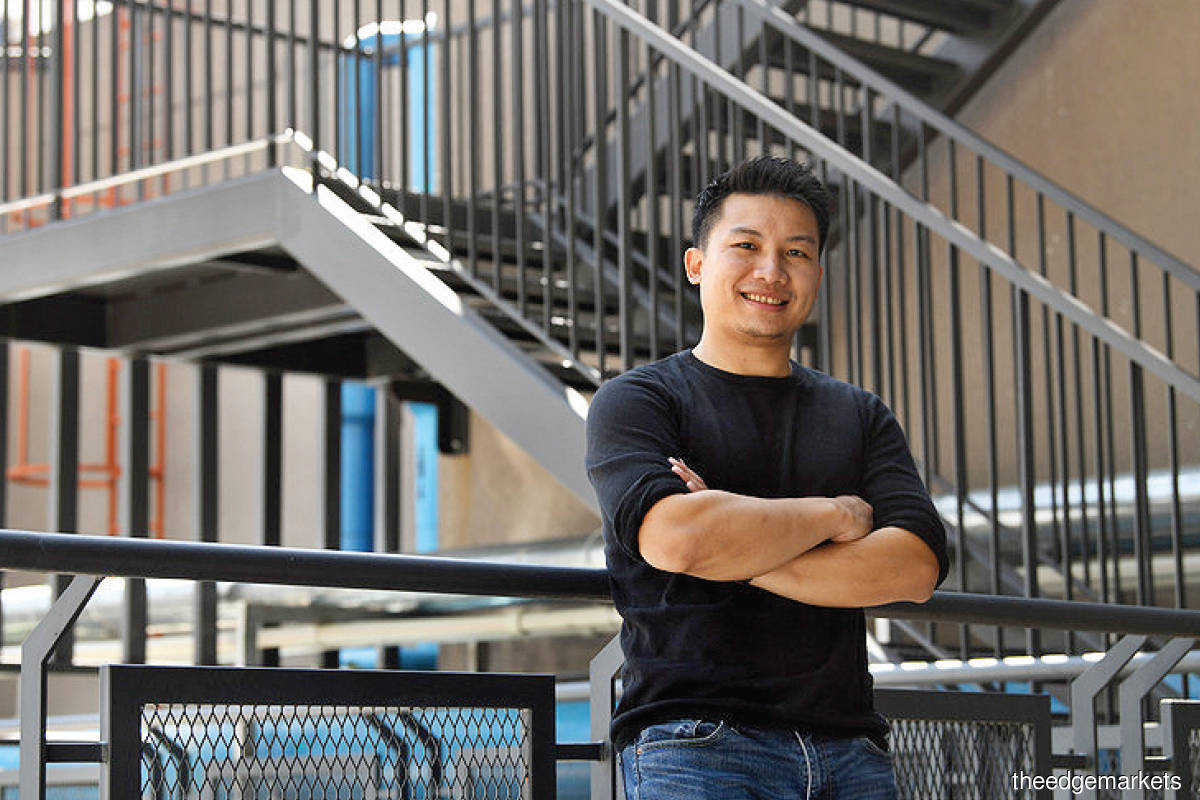 "Value investors tend to stick to certain metrics such as cash flow and earnings before putting money in a company. But this is not going to be enough. You need to understand market forces in play, such as the ongoing renewable energy trend, among others.” - Yong (Photo by Mohd Shahrin Yahya/The Edge)

Market exuberance last seen in the second half of 2020 was not repeated this year. Yet, 2021 has still been a good year for full-time investor Rondy Yunanda Yong, who managed to make attractive returns by executing a special situation trade, and holding on to growth stocks like Tesla Inc.

Yong believes 2022 will be challenging as interest rates are expected to rise and value investors will have to adjust to the environment to achieve outperformance.

“Value investors tend to stick to certain metrics such as cash flow and earnings before putting money in a company. But this is not going to be enough. You need to understand market forces in play, such as the ongoing renewable energy trend, among ­others,” he says.

Before venturing out on his own to start a family office and becoming an angel investor, Yong was a trader at the equity proprietary trading desk of CIMB Bank Bhd for over two years. The experience enabled the 33-year-old to spot an opportunity in the market this year when Tan Sri Syed Mokhtar Albukhary proposed to privatise MMC Corp Bhd through a selective capital reduction scheme.

According to news reports, through his investment vehicle Seaport Terminal (Johore) Sdn Bhd, the tycoon extended the offer for the 1.47 billion shares, or a 48.28% stake, that it did not own in MMC. He offered RM2 per share to investors, causing the price of the company’s shares to shoot up to about RM1.80 from RM1.20 during that period.

Despite the run-up in share price, the difference between the offered price and the company’s last traded price, otherwise known as the spread, was big, thought Yong.

“The 10% spread (20 sen against RM2) was fat. In Hong Kong, the gap is usually 1% to 3%. It could be because the Malaysian market is less efficient, or investors were worried that the privatisation deal wouldn’t happen.”

Yong studied the deal and found out that such a privatisation plan usually takes about six months. A total return of 10% in half a year would translate into an annualised return of 20%, while the risk of the deal not going through was relatively low, in his view.

“MMC has been undervalued for a long time and Syed Mokhtar has many plans for the company if it were to be taken private. The whole proposal made sense to me,” he says.

Yong calls this opportunity an event arbitrage, a trading strategy he commonly deployed when he was a proprietary trader dabbling in regional markets.

So, Yong threw in some money to acquire MMC’s shares. However, to his surprise, the company’s share price fell further to about RM1.60 one month before its extraordinary general meeting (EGM) was held. It was a significant event as its shareholders would vote for the privatisation proposal.

Now that the spread had widened to about 20%, the trade became even more attractive to Yong. “The risk-reward [of the trade] started to look very good to me. I was convinced and sold some holdings in my Malaysian bond fund to buy more shares in MMC.”

Yong says the fall in share price was due to some investors having “cold feet” that the privatisation plan would not go through. Yong was nervous too but he stuck to his guns.

After all, he had dealt with wild swings in the markets when he was a proprietary trader at CIMB. “Fortunately, such an event wasn’t new to me when I was a trader trading the Taiwan market. There had been cases where one day, people just panicked and sold everything. The next day, after they calmed down, prices went limit up and recovered to their previous level. I’ve seen it before. You have to stick to your call while not being able to sleep for a few nights.

“It is similar in the case of MMC. I didn’t see why the privatisation deal would not go through,” he says.

Indeed, the privatisation proposal went through in September and Yong is now waiting for his shares to be purchased at the agreed price.

As a growth investor who does not shy away from companies with high valuations and huge potential for future earnings, Yong also reaped good returns from holding on to Tesla shares. He calls himself a “Tesla bull”, in fact.

“I’ve missed the likes of Amazon and Google, and I told myself that I’m not going to miss [investing in] Tesla this round,” he says.

He views Tesla as a “generational stock” that could transform the world’s future through electric vehicles and lithium-ion batteries. It is well positioned for the environment, social and governance (ESG) trend that has been gaining huge traction in recent years.

Despite his good run in the past two years, Yong says he has learnt lessons from the markets, which also tie back to his experience as a proprietary trader with CIMB.

For one, investors need to be more aware of trends and market forces. Nowadays, the same amount of earnings generated by a company in sectors in the new economy are valued at a higher price than those from traditional sectors, he notes.

According to Cheah, two common factors that cause stock prices to increase are earnings growth and dividends. A company that increases its earnings by 10% could see its share price rise about 10%. If the company distributes a dividend of 5%, its share price is likely to run up by another 5%.

“Then, there is the third factor, what Cheah termed as price-earnings (PE) re-rating or de-rating, which means how much investors are willing to pay for the company’s shares [at what PE multiples].

“For instance, Cheah said he invested in a Shanghai-based company in the renewable energy sector. The investment community gave it a valuation of 30 to 38 times earnings. When he exited the trade, the company was traded at about 76 times its earnings, which has doubled [and is much higher than companies with similar earnings in other traditional sectors].

“One dollar of earnings received by the renewable energy company [that the market likes] is valued a lot higher than other traditional sectors nowadays.”

The ability to identify and understand such trends and ride them is what value investors will need to think about going forward.

Yong says he learnt this when he was a proprietary trader from 2015 to 2017. Sitting in front of the screen from 7am to 8pm most days then, Yong deployed various arbitrage strategies to trade derivatives and equities. During other times, he would arbitrage the Taiwan index versus the futures contracts of the index.

As complicated as this may sound, Yong learnt that there are market forces that may not be visible to some investors. “For instance, on this particular day, an index rebalancing is happening (where new companies would be added into the index list while existing ones are excluded) and there are investors that apply a risk arbitrage strategy on it by putting, let’s say, RM50 million on the index. It would impact the component stocks of the index and their trading volumes could swing like crazy. However, the man-in-the-street might be thinking, what is happening? The ability to understand market forces would be the key that differentiates your performance from others,” he says.

He adds that investors would also have to get more comfortable investing in companies in the right sectors with higher PE multiples going forward. Still, he acknowledges that 2022 will be more challenging than the previous couple of years as inflation is on the rise. As interest rates rise, market players would be less bullish on growth stocks, such as Tesla, and less generous in attaching them with high valuations.

Does Yong plan to turn more conservative next year? “No. I still have a bias towards growth companies and I won’t change my portfolio,” he says.

Commenting on the equity portion of his personal portfolio, Yong allocates 50% of his money in growth stocks, 30% in value stocks with solid cash flows and steady earnings and 20% in cash, reserved for special situation trades. He believes his exposure to value stocks is sufficient to weather through next year’s market.

After enjoying good returns for two years, Yong is also prepared to take losses next year if markets turn against him. “Would next year be a good year for me? I don’t know. But we shouldn’t be afraid of making a loss in specific years. I was losing money when I started managing the family fund after I left CIMB in 2018.

“Investors should not judge their performance on a short-term basis but a longer period. More importantly, it is about how you come out from the loss and what lessons you learnt from the mistakes,” he says.

Yong is also an angel investor of StockBit Group, an Indonesian wealth tech platform with over a million users. The start-up raised US$95 million (RM401 million) in May from various investors to further develop its mutual fund investment app, Bibit.