Faster than a Porsche 911 Carrera

Here’s what you say when you want to criticise an Audi: It’s boring.

Boring, as in great on paper but with no real personality, aesthetically or otherwise. You whine that its nondescript body style needs more than just the gaping front grille trimmed in brilliant light-emitting diode (LED) bulbs. Or that its German engineering leaves no room for driving joie de vivre.

It also has a stylish front end with angled headlamps lined by the tiny LEDs, like jewelled eyelashes on an ingénue. The smooth, clean sides blend back to a chic rear. It’s a happy car.

The RS5 is neither as aggressive as the BMW M4 nor as morose as the Mercedes CLA45 AMG. But it’s a worthy contender in the sport sedan segment, the best option if you want to be a little different from the many thousands of bankers, brokers and businessmen who drive a sport sedan around the country every day. Worth serious consideration for those who want to pay less than US$80,000 for something whose athleticism doesn’t exclude some practicality.

What I don’t get is why Audi insists on showing many of its new wares in stark white — its blanched stand has become predictable at auto shows from Geneva to Los Angeles, and the car I drove all over Long Island late last month looked like a bleached puppy. A topcoat in candy apple or indigo would give it an extra push toward dynamism.

Audi claims the shade makes the cars photograph better, accentuating its angles, but when you already have the RS5’s subtle lines and muted architecture, white can’t be the best option.

At any rate, one of my favourite things about Audis is how recognisable they are, even from a distance. The RS5 is no different. Credit its enormous lateral grilles and adaptive xenon headlights and striking fog lights for that.

The badging on the RS5 is also a subtle signal. The car has a bold, red stripe along the base boards, steering wheel and rear end. I liked that they (discreetly) alerted everyone around that I had the fastest version available.

Oh yeah — and it’s fast. Don’t let that cute face fool you. Audi’s trademarked Quattro four-wheel drive, seven-speed transmission, impeccable suspension and tight brakes pack real potency. Drive this on the highway for an afternoon, or dodge through town during rush hour traffic. It’ll feel eager either way. Did I mention that it’ll hit 100kph in 4.5 seconds? That’s faster than a Porsche 911 Carrera, which costs almost US$20,000 more.

The RS5 comes with good things inside. Things appropriate to its price and brand: auto-dimming mirrors, Napa leather heated seats, and a wide, adjustable sunroof are standard. There are 14 speakers with Bang & Olufsen sound. The infotainment system with parking aids and crash-avoidance technologies works quickly and easily. The flat-bottomed steering wheel allows for direct contact with every point of your turns at all times; it seems crazy but that compacted side somehow makes steering seem quicker and more direct than when using a round wheel.

Here are some complaints: The back seat is limited. It will fit two people only, without even the prospect of belting someone in the middle between them. Legroom feels tight. 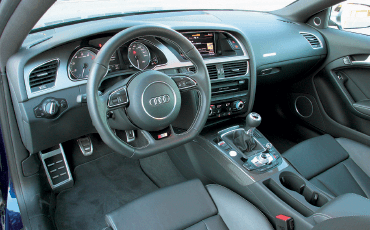 Also, the car comes with three 12-volt power adaptors/cigarette lighters — but not even one USB outlet. What?

And the adaptive rear spoiler is cute, but ... why? It seems chintzy and superfluous, like a Barbie-doll extra added on for (little) effect.

But anyway. Suffice it to say the RS5 is powerful, poised and pretty. It has a direct approach to driving. You don’t get the sense it has a lot going on in its internal monologue.

But that doesn’t make it shallow. It just makes it fun. — Bloomberg