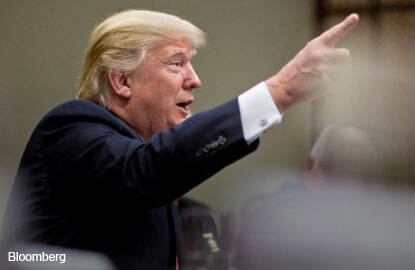 WASHINGTON/UNITED NATIONS (March 7): Faced with a growing test of resolve for a new U.S. president who vowed while campaigning to get tough on North Korea, Donald Trump's aides are pressing to complete a strategy review on how to counter Pyongyang's missile and nuclear threats.

All options are on the table, ranging from tighter sanctions aimed at pushing North Korea back into disarmament talks, to a return of U.S. nuclear weapons to South Korea, and even pre-emptive air strikes on North Korean missile installations, senior U.S. administration officials said.

They added a consensus was forming around relying for now on increased economic and diplomatic pressure — especially by pressing China to do more to rein in North Korea — while deploying advanced anti-missile defenses in South Korea and possibly in Japan, as well.

Among the other possibilities, one U.S. official said, was returning North Korea to the U.S. list of countries that support terrorism.

That would be a response to the suspected use of nerve gas to kill Kim's brother at a Malaysian airport last month. It would subject Pyongyang — already heavily sanctioned by the United Nations and individual states, so far to little effect — to additional financial sanctions that were removed when it was taken off the list in 2008.

For now, U.S. officials consider pre-emptive military action far too risky, given the danger of igniting a regional war and causing massive casualties in Japan and South Korea and among tens of thousands of U.S. troops based in both allied countries.

Such ideas could gain traction, however, if North Korea proceeds with a threatened test of an intercontinental ballistic missile capable of hitting the United States. Just before he took office in January, Trump tweeted: "It won't happen!" when Kim said North Korea was close to testing an ICBM.

Review could be completed this month

The review is expected to be completed by the end of the month, officials said. Decisions could be held up, however, by the slow pace at which Trump has been filling national security jobs.

Trump is known to have little patience for detailed foreign policy discussions, but officials said he seemed to have heeded a warning from his White House predecessor, Barack Obama, that North Korea would be the most urgent international issue he would face - so much so that he requested intelligence briefings on the issue.

While officials have stressed the need to persuade China to do more to pressure North Korea, Trump's first concrete response to North Korea's missile tests has been to start installing an advanced anti-missile defense system in South Korea, which has incensed Beijing.

Diplomats said the move might reassure U.S. allies but could backfire by antagonizing China, which regards the system as a threat, and make it less willing to step up sanctions on its neighbor.

"You have to adjust and calibrate all the options based on the facts on the ground," said an administration official, who added that media reports highlighting military options were overblown.

"The ability to have sanctions that pack some punch and are more dynamic than we have had in the past is going to be dependent to some extent on Chinese cooperation," he said.

Chinese diplomats argue that Beijing is doing all it can.

Glazer said she saw no good military option. While past talks have failed, she would not be surprised if Trump wanted to try diplomacy.

One idea could be to discuss a freeze in North Korea's nuclear and missile programs, which would fall short of current demands for nuclear disarmament.

"North Korea may insist on being recognized as a nuclear weapons state as a precondition, in which case the U.S. would have to decide whether to make that concession," she said.

"Doing this would ... compel the regime to rethink its course and make it more likely to return to dialogue and denuclearization, lest it risk collapse," he said.

Whether Trump will be willing to tolerate the level of risk needed to make such a strategy work remains unclear.

"This administration intends to come up with options based on the cards we are dealt; not try to change the deck entirely, which is what regime change is."