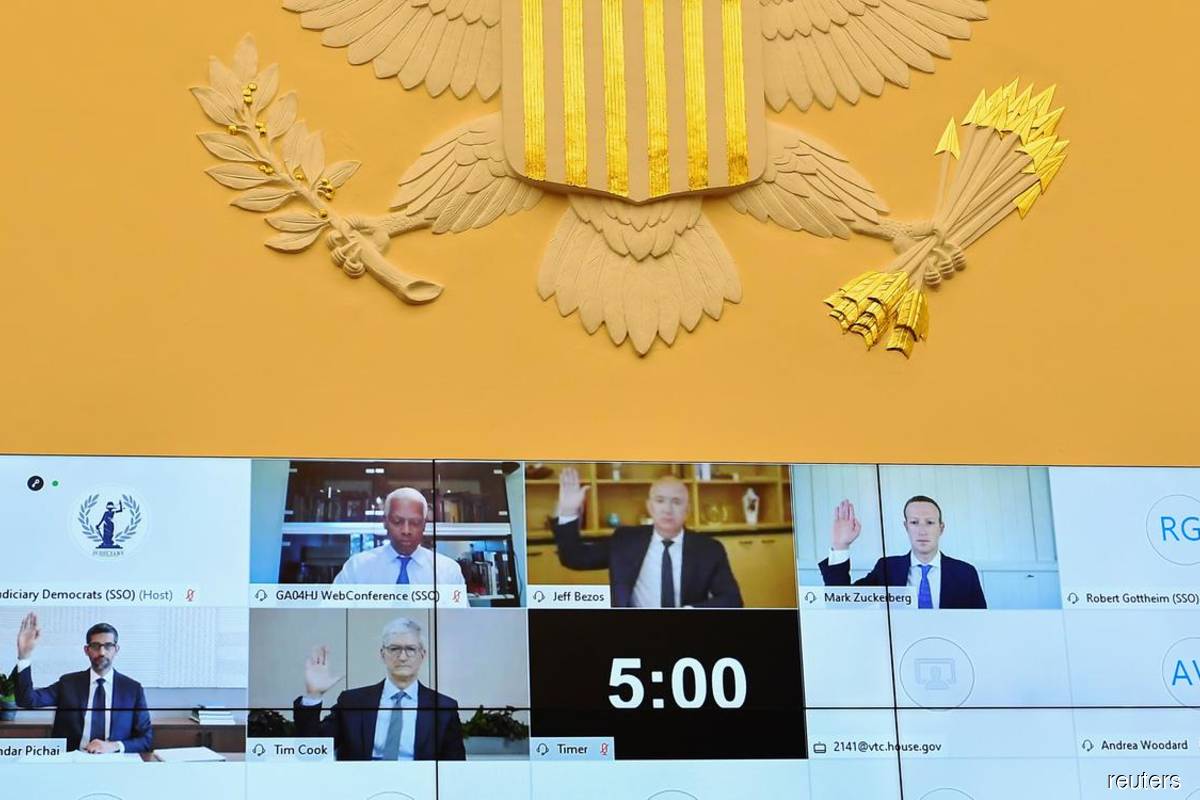 WASHINGTON (July 30): Google and Facebook took the sharpest jabs for alleged abuse of their market power from Democrats and Republicans on Wednesday in a much-anticipated congressional hearing with four of America's most prominent tech CEOs in the hot seat.

Though it was Bezos’ first congressional testimony, he appeared the least fazed by his grilling. Cook drew fewer barbed questions than Bezos, but handled them efficiently while Zuckerberg took the most damage, stumbling a few times when confronted with internal emails.

Pichai took the most heat from conservatives and he looked the worse for it, as he repeatedly told lawmakers he would be happy to look in to various situations and get back to them.

Unfortunately, the Big Tech hearing was decidedly low-tech. Bezos escaped questioning for about 90 minutes in what may have been a tech issue, and was caught reaching for what appeared to be a snack.

Poor audio quality, flat-screen televisions switching off, and chief executives appearing together as thumbnails on a large screen frustrated viewers and led to mockery of the virtual set-up on Twitter.

U.S. Representative David Cicilline, a Democrat and chair of the antitrust subcommittee, began by accusing Google of theft.

"Why does Google steal content from honest businesses?" he asked.

Cicilline alleged Google stole reviews from the company Yelp Inc and said Google threatened to delist the company from search results if it objected.

Pichai responded mildly that he would want to know the specifics of the accusation. "We conduct ourselves to the highest standards," he added, disagreeing with the characterization that Google steals content from other businesses to keep users on its own services.

Facebook's Zuckerberg took a series of questions about the company's purchase of Instagram in 2012, and whether it was acquired because it was a threat.

Zuckerberg responded that the deal had been reviewed by the Federal Trade Commission and that Instagram at the time was a tiny photo-sharing app rather than a social-media phenomenon. "People didn't think of them competing with us in that space," he said.

The hearing marked the first time the four CEOs have appeared together before lawmakers.

Representative Pramila Jayapal pressed Amazon's Bezos on whether the company used data from third-party sellers in making sales decisions. In a previous hearing, an Amazon executive denied this under oath and was contradicted by a later news report.

Bezos answered cautiously that the company had a policy against such actions. "If we found that somebody violated it, we would take action against them," he said.

On the Republican side, Representative Jim Jordan accused the companies of taking a long list of actions that he said showed they try to hamper conservatives from reaching their supporters.

"Big Tech is out to get conservatives," he said. The companies have denied allegations of political censorship.

Jordan and Cicilline had a heated exchange within 30 minutes of the hearing's start, tangling over Jordan's request to allow another member of Congress to join the panel.

Jordan's allegations come after President Donald Trump, who has clashed with several of the biggest tech companies, on Wednesday threatened to take action against them with Executive Orders.

CEO Cook rejected the notion there is nothing to stop Apple from raising the commissions it charges in the App Store.

"I disagree strongly with that," he said. "The competition for developers - they can write their apps for Android or Windows or Xbox or PlayStation. We have fierce competition at the developer side and the customer side, which is essentially so competitive I would describe it as a street fight for market share in the smartphone business."

In his opening remarks, Zuckerberg told lawmakers that China is building its "own version of the internet focused on very different ideas, and they are exporting their vision to other countries."

Cook pointed out that the fiercely competitive smartphone market includes China's Huawei Technologies Co Ltd, which has been a focus of considerable U.S. national security concern.

A detailed report with antitrust allegations against the four tech platforms and recommendations on how to tame their market power could be released by late summer or early fall by the committee, which has separately amassed 1.3 million documents from the companies, senior committee aides said.