FORTY years on from the unveiling of its first ever mid-rear-engined V8 model, the 308 GTB, the Prancing Horse opens a new chapter in its eight-cylinder history.

The Ferrari 488 GTB aims to provide track-level performance that can be enjoyed to the full even by non-professional drivers in everyday use.  It is  that long-awaited evolution of the 458. It’s a mid-cycle refresh of the current car, but that term sounds too mundane for this machine.

The updated model gets a GTB suffix (short for Gran Turismo Berlinetta) to tie it to Ferrari’s first production mid-engined V8 car, the 308 GTB. However, that’s not as important as the number 488. That indicates a new engine, but it doesn’t displace 4.8 litres as the name suggests. Instead, it’s an all-new twin-turbocharged 3.9-litre V8 that isn’t shared with any other Ferrari model.

The new model also exploits to the full the know-how gleaned by Ferrari technicians over the last decade through the XX programme which makes extreme track-only cars available to gentleman test drivers. The data yielded has made a significant contribution to the refinement of the electronic and vehicle control systems so that drivers can make the most of the incredible performance of this new car.

The Ferrari 488 GTB’s new 3902cc V8 turbo is at the top of its class for power output, torque, and response times, making it the new benchmark for this kind of architecture. The engine unleashes 670 constant velocity or cv at 8,000 revolutions per minute (rpm) along with 760 Newton metre or commonly referred to as nm of maximum torque in seventh gear and a response time to the accelerator of just 0.8 seconds at 2,000rpm.

These figures are sufficient to allow the Ferrari 488 GTB to accelerate from 0 to 200 kph in an astonishing 8.3 seconds.

The Ferrari 488 GTB’s subsystems and electronic controls make its power and performance instantly available and controllable. It is, in fact, the most responsive production model there is, with razor-sharp response times comparable to those of a track car.

To help drivers harness all of that performance, the 488 GTB is equipped with the latest Ferrari electronic aids.

That includes a version of the slip-angle control system that debuted in the 458 Speciale. Called Side Slip Control 2, it’s supposed to be less invasive than the original system, and works with the car’s F1-Trac traction control E-Diff differential, and adaptive suspension.

The interior gets some updates, but the layout is the same as in the 458.

The Ferrari 488 GTB will make its world debut at the International Geneva Motor Show in March, but from now can be seen at www.ferrari.com. 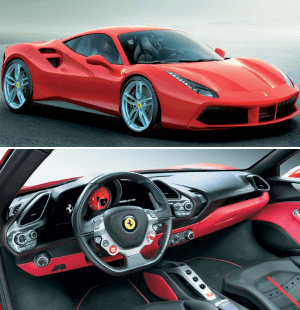