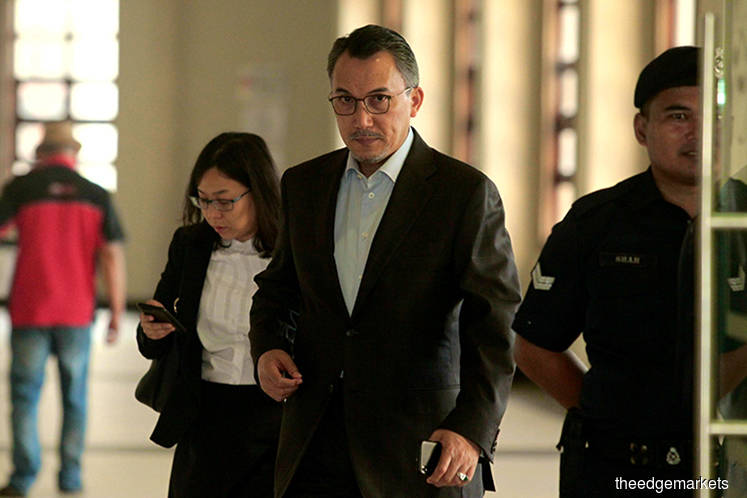 Ismee, who is the prosecution's 39th witness, said this instruction was related by Najib, who was advisor emeritus to SRC, to then SRC managing director and director Nik Faisal Ariff Kamil, in their meeting on Sept 7, 2011.

“The instructions were for RM1.5 billion of the RM2 billion fund to be transferred to a bank in Switzerland and another RM300 million to a bank in Hong Kong.

Ismee said as members of SRC's board of directors, they had complied with Najib's instructions after being informed of them by Nik Faisal during their board meeting on Sept 13, 2011.

The minutes of Najib's meeting with Nik Faisal were tendered in court for the first time today, which the defence contended as a fake document.

However, the prosecution argued that the minutes, which is a copy of the original document, could be accepted as evidence as the minutes were also referred to, with similar portions of it contained in, the minutes of SRC board's meetings on Sept 13, 2011.

Defence lawyer Harvinderjit Singh objected to the minutes of the meeting between Najib and Nik Faisal be admitted as evidence, as a copy of it was only handed to the defence on May 17. “Our contention, as we will raise during the cross-examination later, is that this minutes is fake and contemperoneous and should not be admitted as evidence,” he said.

Ismee, who is also formerly the chief executive officer of Tabung Haji, further clarified when asked by Ishak that he found the document himself and gave it to the Malaysian Anti Corruption Commission only recently.

Now, appointed prosecutor Datuk V Sithambaram, together with Harvinderjit, is making submissions on the admissability of the minutes of the meeting between Najib and Nik Faisal.

During his examination in chief, Ismee said he is a professional accountant and was appointed as non-executive director of 1Malaysia Development Bhd (1MDB) in 2009.

“I was appointed to SRC's board of directors due to my capacity as a board of director of 1MDB and with that, I was asked to chair the board of directors of the company. The other members (on the board) are Datuk Suboh Mohd Yassin, Datuk Che Abdullah @ Rashidi Che Omar, Datuk Shahrol Azral Ibrahim Halmi (1MDB former CEO) and Nik Faisal,” he said.

“I left SRC on May 6, 2014 and this was made officially on Aug 14 that year," he said, claiming he was not satisfied with the running of the company by its CEO Nik Faisal, regarding the company's accounts and its finances.

Ismee said every decision for SRC needs the advice from the advisor emeritus, which is Najib, and that if there were any issues, it would only be brought by Nik Faisal to Najib's attention.

"Nik Faisal is the link between SRC's board of directors with Najib. Any action to report or discussions or decisions related to SRC would be made by Nik Faisal to Najib. Regarding the work related to SRC, I had brought up [that] there were issues of governance with regards to SRC. I realised that Najib as the PM who appointed me as SRC director, had the power to hire and fire any SRC board member," he said.

In his testimony to questions from Ishak, Ismee also agreed that SRC was required by the board to report to Najib, over any decisions or progress made by the company.

He also told the court that during his tenure, SRC's board approved for the company to seek a loan from KWAP and that a subsequent loan of RM2 billion was approved in August 2011, with another RM2 billion in March 2012.

Nik Faisal has gone missing since 2015.