Export growth at 3.1% in January but outlook remains weak 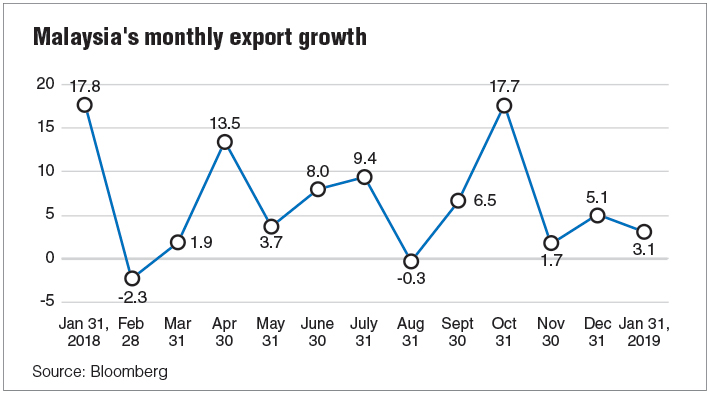 KUALA LUMPUR: Analysts expect slower Malaysia export growth for 2019 despite the higher-than-expected growth recorded in January 2019, as leading indicators point to an easing of economic growth this year.

MIDF Research said the expansion in exports is mainly due to the 23.5% y-o-y growth in exports of mining goods, compared with its contraction of 1.5% a year earlier, as well as exports of manufactured goods which grew 2.9%.

It noted that Malaysia’s trade surplus of RM11.5 billion in January was at a three-month high.

The research house said exports to China rebounded from a contraction of 0.5% y-o-y in December 2018 to 9.1% in January, supported by higher exports of liquefied natural gas (LNG), chemicals and palm oil.

Despite the decent numbers for the month, MIDF maintains a gloomy outlook for the first quarter of 2019.

“Looking ahead to the first quarter of 2019, we expect exports to perform modestly, in line with the Malaysian leading index for September 2018, which recorded negative growth on both annual (-1.7%) and monthly (-0.8%) basis, suggesting the economic growth to ease in the first quarter,” it said.

MIDF also noted the slower trade performance by other countries in the region, such as Vietnam which saw moderation to 1.6% y-o-y in February from 8.9% in January, while South Korea’s exports contracted 11.1% y-o-y.

“Amid higher base effects and continuous signs of easing key global indicators, we foresee exports growth to moderate further at 3.6% this year from 6.7% in 2018. The moderating pace is consistent with global commodity prices, expectation of a slight slowdown in overall business performance on top of the uncertainty over the Sino-US trade conflict,” it said.

In a note, she said there are further signs of slowing global trade activities as the year progresses, noting the cooling Chinese economy and a slower global technology cycle besides the concerns over the US-China trade dispute.

In the event that a trade deal is signed between the world’s two largest economies, Goh said there are still other structural issues surrounding competition, technology transfer and intellectual property protection, on top of issues with implementation and enforcement of the deal that may slow the removal of existing tariffs on both sides.

“If tariffs are removed, the benefits to Malaysia from trade relocation and commodity substitution [from soya bean to palm oil] may dissipate. The slower global cycle and fading technology boom will continue to be felt across various supply chains and production channels.

“Hence, we maintain our cautious view on Malaysia’s export outlook with a growth target of 4% to 5% for 2019,” said Goh.