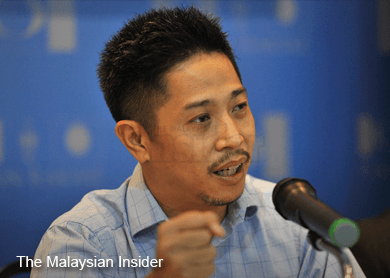 (June 4): A PKR lawmaker today revealed that he will be filing an urgent motion in the Dewan Rakyat on Monday to discuss a Special Branch report that revealed some 80% of law enforcement and security officers at Malaysian borders are corrupt.

Alor Star MP Gooi Hsiao Leung said that the Home Minister Datuk Seri Ahmad Zahid Hamidi must be held accountable and personally give an explanation to the august house about the damning report, which was highlighted by English daily, New Straits Times (NST) yesterday.

"I will file an urgent motion in Parliament on Monday to discuss the Special Branch report which has put our entire country’s law enforcement capability into serious question," the PKR supreme council member said in a statement today.

"The home minister must be held accountable and personally answer to Parliament by giving a full and transparent explanation as well as the government’s response to the report disclosing pervasive grand scale corruption in our enforcement agencies throughout the country."

In an exclusive story, the NST said that the report, compiled by the Special Branch unit, was the result of 10 years of covert, deep-cover surveillance and intelligence gathering at border checkpoints and at different enforcement agencies including the Immigration Department, the Malaysian Maritime Enforcement Agency (MMEA), the Anti-Smuggling Unit (UPP) and the police’s General Operations Force.

Quoting sources, the NST report said that on top of being corrupt, these personnel were also on the payroll of drug, weapon and human smuggling syndicates.

The Special Branch, the daily said, had shared the information it had gathered with the agencies involved but were mostly not acted upon.

This comes in the wake of the recent discovery of mass graves and human trafficking camps in Perlis.

Describing it as the "biggest institutionalised corruption scandal" ever, Gooi lashed out at Putrajaya, claiming that the government was avoiding responsibility for its own failures in enforcing security by blaming the problem of human trafficking on foreigners.

"Any self-respecting home minister in charge of national security and law enforcement affairs would have expressed absolute disgust and horror, calling for departmental heads to roll following the Special Branch report that the various enforcement agencies have for years, failed to act on their intelligence reports on corruption.

"In a totally unacceptable for the home minister to shirk his ministerial responsibilities by providing an appalling knee jerk reaction, in what is clearly seen as an attempt to pass on the problem to the army – in calling on the army to take over the job of policing our borders," he said.

Earlier this month, the Home Ministry denied reports on the existence of holding camps and mass graves of illegal ethnic Rohingya migrants on the Malaysian side of its border with Thailand.

Its secretary-general Datuk Alwi Ibrahim said investigations carried out by the police had found no such camps or graves in Malaysia.

However, upon the discovery of the mass graves in Perlis, Zahid said last week that local authorities may be complicit in the case, adding that investigations showed they were collaborating with not only with the locals but with traffickers from Thailand, Bangladesh and Myanmar.

Gooi said Zahid must immediately launch a "deep and thorough" probe into the findings of the Special Branch and haul up these enforcement officers, including the Inspector-General of Police (IGP) himself to explain and account for the total failure of security at the nation's borders.

"Clearly, nothing short of a Royal Commission of Inquiry must also be established to investigate the rampant and widespread corruption in the various enforcement agencies on border control disclosed in the Special Branch report," he added. – The Malaysian Insider