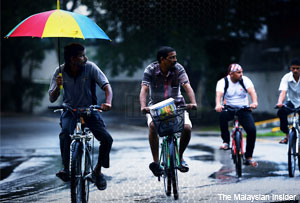 (October 1): Foreign workers are the most victimised in the labour force and the Malaysian Trades Union Congress (MTUC) is ringing the alarm bell of more unrest if the nearly six million workforce is not treated with dignity.

Its secretary-general, N. Gopal Kishnam, said the riot in August involving Bangladeshi and Nepalese workers at an electronics factory at the Kelapa Sawit industrial area in Kulaijaya, Johor, was just an early warning symptom of long-standing problems that were being swept under the carpet.

"To my knowledge, this is the first time an incident of such magnitude had happened and this is cause for concern," he told The Malaysian Insider in a recent interview.

Gopal was referring to a strike on August 27 by some 800 foreign labourers, mostly from Nepal and some from Bangladesh, which turned into a riot when the workers threw stones at the factory's management office, set fire to a car and eventually torched part of the plant.

The workers had claimed physical abuse, and said they were forced to work on Sunday and overtime without pay. They also said the company did not provide transport for them, forcing them to walk more than an hour to get to work.

The incident outside the JCY HDD Technology Sdn Bhd plant, which makes electronics parts, followed a strike a week earlier at the company's branch in the Tebrau IV Industrial Area near Johor Baru.

It was triggered by anger over the health of a worker who eventually died.

It was not the first time foreign workers have protested against their employers' slow response to treating colleagues who were ill.

Gopal said two officers from the Migrant Resource Centre in Johor have been assigned to look into the matter, but deeper problems remained.

"This incident is an eye-opener and it occurred because the foreigners could no longer suppress their frustration. Employers must not abuse their workers," he said.

Gopal said there were an estimated 350,000 workers in the electronics sector, 35% of them foreigners.

Foreigners were often recruited to work in this sector as it did not attract locals because of the low wages.

Malaysian labour laws are applicable to both local and foreign workers, but foreigners were often exploited.

In the case of JCY HDD Technology, Gopal said the majority of workers at its Kulaijaya plant were foreigners.

"Initial information made available revealed that 90% of the workforce were foreigners and the employer did not pay wages and overtime as agreed. Their working conditions are left much to be desired," he said.

It found that nearly one in three workers in the sector suffered abusive work and living conditions and were also subjected to debt-bondage.

"In the last two International Labour Organisation conference, Malaysia has been singled out as practising forced labour in the electronics sector," Gopal said.

Although workers are allowed to form unions in the electronics sector, employers often frustrate such attempts.

Gopal claimed that "all sorts of underhanded tactics were used" to suppress organised labour.

By law, unions are allowed to hold strikes as a form of industrial action, but Gopal said employers made it nearly impossible.

The recent riot, however, had started off as a "wildcat strike", an unofficial action aimed at pressuring employers to meet worker demands, Gopal said.

MTUC is also hoping the National Minimum Wage Council would propose to the Cabinet that the monthly wage for private sector employees be fixed at RM1,200, and a RM300 cost of living allowance be given from next year.

"The council which is headed by a retired judge is in the midst of discussion with other interested parties. We hope any proposal will be treated favourably due to rise in cost of living ," he said.

Under the Minimum Wage Act 2012, those working in the peninsular must be paid at least RM900, and RM800 a month for those in Sabah and Sarawak.

Gopal said the minimum wage was subject to review every two years as provided under the law.

Malaysia has some 5.8 million foreign workers, and of this, around 2.9 million are legal.