Cumulatively for the full FY14, DPU was 8.91 sen, representing 5.4% dividend yield and a 100% payout of its distributable income.

This had more than offset its lower revenue from Sungei Wang Plaza (Kuala Lumpur) (down 7% y-o-y to RM67.2 million) which was impacted by the ongoing Mass Rail Transit works.

Gross revenue from The Mines increased by 11% y-o-y to RM71.7 million due to onselling of electricity to tenants.

CNI improved slightly by 1% y-o-y to RM149.7 million: CNI grew by a marginal 1% y-o-y (against revenue growth of 3% y-o-y) as CMMT had absorbed the cost of higher electricity and assessment rates to the tune of RM4 million instead of passing it straight to its tenants.

We believe that such a strategy is commendable in light of the current challenging environment in order to maintain its tenants.

We gather that the completed works in FY14 includes Gurney Plaza’s reconfiguration works, ECM phase 2 asset enhancement works to improve the trade mix, and the installation of chillers at The Mines and Gurney Plaza.

As for 2015, CMMT has allocated capital expenditure of RM30 million to RM40 million for asset enhancement initiatives on two of its malls pending authority approval.

In view of its FY14 numbers being within our expectation, we leave our forecast for FY15 unchanged. For FY15, we expect CMMT’s CNI to grow by 7% y-o-y.

Our TP is based on the dividend discount model (required rate of return: 7.3%; perpetual growth rate: 1.3%).

We like CMMT in view of the expected FY15 dividend yield of 5.9%, which is the highest among the five real estate investment trusts under our coverage.

In FY15, we expect a marginal improvement in gross revenue by 2% y-o-y with the completion of some of its asset enhancement works and as well as a non-repeat of hikes in electricity rates due to the restructured Budget 2015, which has deferred electricity and gas rate increases. Also, we do not expect property assessment rates to rise again in FY15.

Hence, its CNI in FY15 is not expected to be negatively impacted by higher property operating expenses as in the case of FY14. We believe that the weaker gross revenue of Sungai Wang Plaza has already been priced in by the market. — MIDF Research, Jan 21 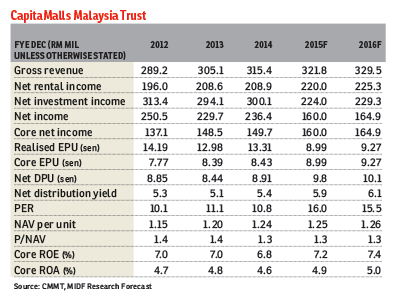