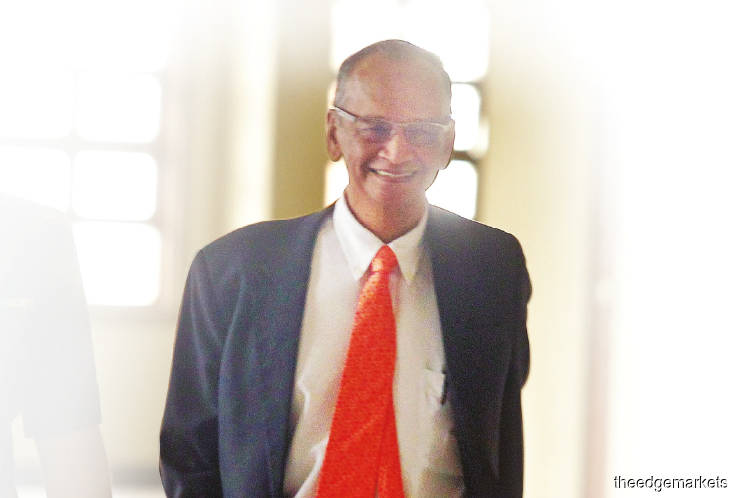 Ambrin says Najib asked him for a briefing on serious issues that the AG found while auditing 1MDB. Photo by Suhaimi Yusuf

In the meeting, Ambrin said Najib asked him for a briefing on serious issues that the AG found while auditing 1MDB.

Ambrin said he raised the matter of 1MDB producing two different versions of financial statements to the Companies Commission of Malaysia, and to Deutsche Bank and AmBank to the former premier.

However, Ambrin said Najib told him not to include this in the audit report and promised that this matter will be brought to the relevant authorities for investigation.

“He promised me that the relevant authorities will investigate and get to the bottom of this,” he said.

Ambrin also talked about the meeting on Feb 24, 2016 with top government officials and 1MDB’s then chief executive officer Arul Kanda Kandasamy to amend and destroy the original audit report of the scandal-ridden fund.

“On Feb 24, 2016, Tan Sri Ali Hamsa instructed me and [former National Audit Department director of audit] Saadatul Nafisah to attend the meeting, while the rest of the 1MDB audit team were instructed to wait outside the meeting room.

“In the meeting, [Najib’s former private secretary Shukry] said the audit report prepared by the National Audit Department (NAD) can be politicised by the opposition.

“I was also briefed that 1MDB management, led by Arul Kanda, will be able to respond to our audit report,” he said.

Ambrin also said that during the meeting, the NAD was pressured to listen to the response from 1MDB on its findings.

“Arul Kanda expressed many opinions on the matter of two versions of financial statements produced by 1MDB, and pressured the NAD to not include this matter in the audit report,” he testified.

“I had no intention to hide but agreed to not include this in the final audit report based on Najib’s promise to report this to the police,” he said.

Ali also testified earlier that the meeting concluded that the Minister of Finance Inc should lodge the police report on the matter.

Following that, he instructed former finance ministry deputy secretary-general Datuk Seri Dr Mohamad Isa Hussain to lodge the report as the Minister of Finance Inc comes under the ministry’s purview.

However, Ali said he found out that in the end, no report was lodged on the matter.

Prior to the meeting, Ambrin said Shukry called him, telling him Najib had asked for a copy of the NAD’s final draft of the 1MDB audit report.

“I thought this was not an issue because it is normal practice for the final draft to be distributed to the chief secretary, the Yang di-Pertuan Agong and Cabinet ministers. This is so that they are ready to give explanation to the Public Accounts Committee (PAC),” he said.

Najib and Arul Kanda have claimed trial in the audit report tampering case.

Najib is charged with abusing his power to amend the final 1MDB audit report before it was submitted to the PAC to protect himself from disciplinary, civil and criminal actions, while Arul Kanda has been charged with abetting the former premier.