The projects are likely to be injected into Eco World International Bhd (EWI-SPAC), a special purpose acquisition company (SPAC) that Liew plans to list on Bursa Malaysia.

In a statement yesterday, EW Investment said it had signed an agreement with Ballymore Group on Sunday to acquire a 75% stake in Eco World Ballymore Holding Co Ltd (EcoWorld-Ballymore).

The remaining 25% stake will be taken up by Ballymore Group, a property investment and development firm with over 30 years of experience in property markets in the United Kingdom and Ireland.

According to the statement, the joint-venture (JV) company will acquire all three sites from Ballymore Group for a total £428.7 million.

“Meanwhile, a resolution to grant planning consent was passed on Nov 6, 2014 for Arrowhead Quay. Accordingly, all three projects are expected to be ready for launch in 2015,” said EW Investment.

EW Investment is a private company incorporated in Jersey, Channel Islands on Nov 18, 2014 with a 70:30 shareholding held by Liew and Voon.

“In view of the proposed listing of [EWI-SPAC] as a SPAC on Bursa, EW Investment is prepared to offer EWI-SPAC a right of first refusal to acquire its 75% stake in EcoWorld-Ballymore,” said Liew in the statement.

“These three projects, which are situated in geographically diversified growth areas offering differentiated pricing points, present an unrivalled opportunity for EcoWorld to introduce its brand name to the Greater London market.

“With our combined and complementary strengths, we believe that the partnership with Ballymore Group can become a strong platform to grow our presence in the UK property market,” Liew said.

“Combining our development expertise and track record with EW Investment’s own experience and international marketing abilities will create valuable synergies for our joint venture and I look forward to working closely with them,” said Ballymore chairman and group CEO Sean Mulryan. 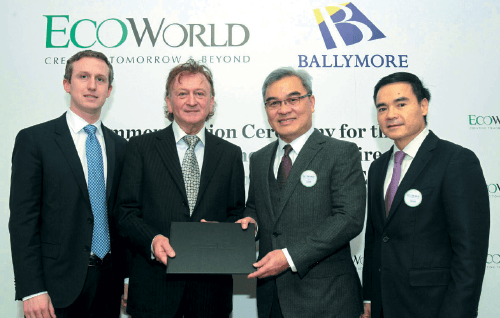