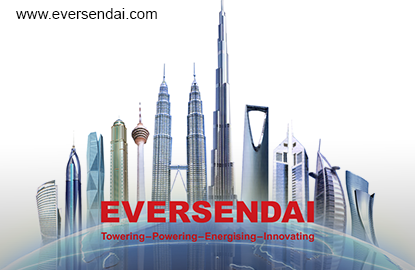 Eversendai Corp Bhd
(Sept 9, 75 sen)
Maintain buy with a lower target price (TP) of RM1.08: We attended Eversendai Corp Bhd analysts’ briefing on Monday. In short, we are of the view that the upfront cost incurred in the second quarter ended June 30 of financial year 2015 (2QFY15) could dampen overall earnings. With that, we tweaked our FY15 and FY16 projections lower by 14.3% and 8.9% to RM62 million and RM74 million respectively as collection of the aforementioned cost would take some time.

On a positive note, prospects of the group remain intact with the replenishment of its order book to continue. We believe there will be a few projects to be announced by year end to meet our assumption of RM1.3 billion. Meanwhile, we have a new target price of RM1.08 from RM1.19 previously following the earnings adjustment.

To recap, the group’s 2QFY15 revenue of RM425.2 million was higher by 5.6% quarter-on-quarter (q-o-q) as the projects secured last year were at advanced stages. Nevertheless, the core net profit of RM4.1 million was 83.9% lower compared with 1QFY15 ended March 31 of RM25.8 million, which was mainly due to the upfront cost incurred in the quarter from the suspension of the Worli project in India costing around RM8 million, and the RM6 million Tanjung Bin project for faster completion.

We anticipate that the upfront cost incurred in 2QFY15 could dampen overall earnings as the claims would take some time to recompense, hence this would fall below our and consensus expectations. With that, we have tweaked our FY15 and FY16 projectios lower by 14.3% and 8.9% to RM62 million and RM74 million respectively.

Year to date, Eversendai has secured a total of RM1.12 billion worth of new projects with 86.3% from overseas. We believe there will be a few projects to be announced by year end to meet our assumption of RM1.3 billion and surpass 2014’s RM1.14 billion. As of first half (1HFY15) ended June 30, the outstanding order book in hand remained healthy at RM1.8 billion, which should keep the group busy for the next two years.

We believe the prospects for the group remain intact moving forward mainly due to its strong presence in the infrastructure-frenzy Middle East. Eversendai so far is involved in mostly high-profile projects in the Middle East and should be able to garner a premium over its competitors. — BIMB Securities Research, Sept 8 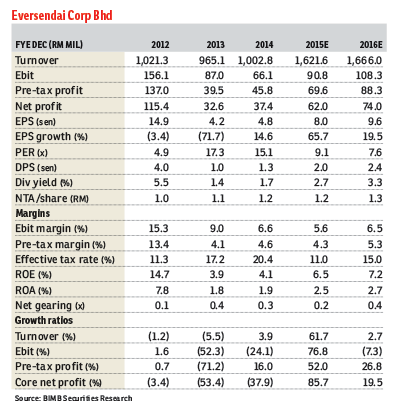