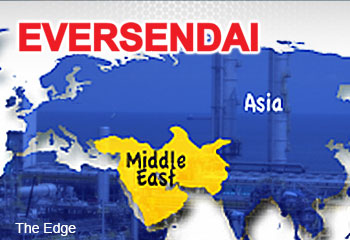 Eversendai’s Executive Chairman and Group Managing Director Tan Sri A K Nathan said besides the jack-up vessels, the group was also expected to play an active role in the O&G and marine sectors through involvement in top-side decks and jack-up rigs, besides rig refurbishment and maintenance.

“We remain committed to making a name for ourselves in this industry and we recognise there is a huge demand for self-propelled jack-ups on a global scale.

“We will be actively bidding for contracts in the Middle East and Asia and strongly believe that our extensive network and experience will provide us with an edge and help bolster our efforts, as we move towards expanding and growing our business regionally and globally,” Nathan said in a press release today.

The statement is in conjunction with Eversendai's initial construction of two self-propelled jack-up vessels, also known as liftboats.

Nathan said Eversendai had achieved a milestone after it began construction of its two GustoMSC NG-2500X self-propelled jack-up units. The jack-up units were being built at Eversendai's yard within the RAK Maritime City in the United Arab Emirates.

Nathan said Eversendai had signed a classification agreement with leading global O&G technical advisor DNV GL, to ensure both units were constructed in accordance with the design and specification.