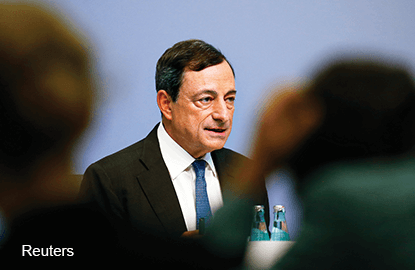 EUROPEAN Central Bank (ECB) President Mario Draghi last Thursday reiterated that his institution has “always acted on the assumption that Greece is and will be a member of the euro area”. He also provided stark data about the huge involvement in the Greek banking system of the euro central banks, whose deposits now exceed those of all others combined.

The larger truth is that European taxpayers, both implicitly and explicitly, have substituted for all sorts of private creditors, depositors and investors in Greece. This European socialisation of private liabilities will continue, forcing the eurozone closer to one of two extreme outcomes: a fiscal union or the exit of Greece from the single currency. Either would be unpleasant for several of the European Union’s other members.

In hopes of offsetting large-scale deposit outflows from Greece, the ECB has used its Emergency Liquidity Assistance (ELA) facility to pump about US$100 billion (RM380.48 billion) into the Greek banking system. Even so, the injection of funds has proved insufficient to avoid a shutdown of the banking system that has lasted three weeks.

As a result, the ECB is now under significant political pressure to increase the banks’ access to the ELA, despite clear evidence that the Greek institutions are experiencing problems of solvency, not liquidity.

This substitution of public money for private funding isn’t a new phenomenon. It has been happening on a large scale since 2010 for Greek public finances. As the country sought to avoid bankruptcy, the exodus of private creditors has been met by growing exposure on the part of official European entities and the International Monetary Fund (IMF).

Even on the investment side, what little real economic activity has occurred has been driven more by public institutions than private investors.

This wouldn’t matter as much if a growing and financially viable Greek economy within the eurozone was on the cards. But as was stressed again by the IMF this week, Greece is encumbered by huge debt and structurally weak growth dynamics, and isn’t on track for such a happy outcome.

Given this set of circumstances, official creditors are getting ever closer to a critical fork in the road as they prepare for another injection of debt-creating funds under the deal to be reached today.

The prevailing approach to Greece, which is increasingly recognised as “extend and pretend”, is proving increasingly hard to sustain — and not just because of questions about Greece’s “will and capacity” to implement the measures required by the latest bailout agreement, as Draghi correctly noted. There are also strains among the creditors, including unresolved issues regarding burden sharing.

With time, the impasse will yield to one of two opposite outcomes: Europe will be forced into embracing wholeheartedly an even greater financial incorporation of Greece, thereby setting the precedent for the type of fiscal integration that Germany and some other countries have consistently opposed.

Or official creditors will need to accept a write-down of their claims on Greece, a solution that is equally unpalatable to some eurozone members. — Bloomberg View