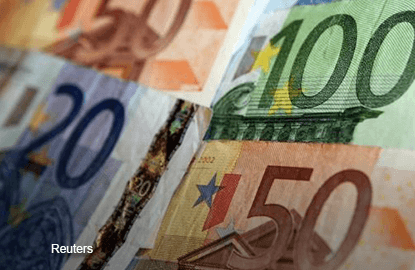 TOKYO (Feb 21): The euro was on the defensive on Tuesday, under pressure from fears that the French Presidential election could upset the status quo, as rising anti-establishment sentiment surfaced after last year's Brexit and the U.S. election.

The premium that investors demand to hold French bonds instead of German debt rose to its highest since late 2012, after a poll showed Right-wing candidate Marine Le Pen narrowing the gap with more centrist opponents.

The first round of the French Presidential election is scheduled on April 23, with the run-off between the top two contenders on May 7.

The euro has been helped by the lack of progress between Socialist candidate Benoit Hamon and hard-left candidate Jean-Luc Melenchon in talks on cooperation.

Fears that cooperation on the left could lead to a run-off between either Hamon or Melenchon and Le Pen, eliminating three main moderate candidates, have dogged the euro since Friday when the two leftists said they were discussing such cooperation.

Another comfort for the euro came from Brussels, where Greece and its international lenders agreed to let experts work out new reforms to Greek pensions, income tax and the labor market that would allow Athens to eventually qualify for more cheap loans.

Greece needs a new tranche of financial aid under its 86 billion euro bailout by the third quarter of the year to meet debt repayments, but agreeing on a fresh aid could prove difficult as not only France but also Germany and possibly Italy face elections later this year.

The dollar was little changed versus the yen at 113.16 yen. It has been slipping, largely in tandem with a fall in U.S. bond yields, after hitting a two-week peak of 114.955 yen last Wednesday.

The minutes from the Federal Reserve's last policy meeting due on Wednesday are the next key focus.

"The minutes could change the market's trend. They may have talked about reducing the Fed's balance sheet. Or the minutes may show some members are quite positive about rate hikes," said Yukio Ishizuki, senior strategist at Daiwa Securities.

"That sort of signal could fan speculation of a rate hike in March. If you look only at the firmness in recent U.S. economic data, there's no reason not to raise rates in March," he said.

Money market futures are currently pricing in the chance of a rate hike next month at about 20%.

The Australian dollar traded at US$0.7689, not far from its three-month high of US$0.7732 touched last week, supported by the firmness in commodity prices.