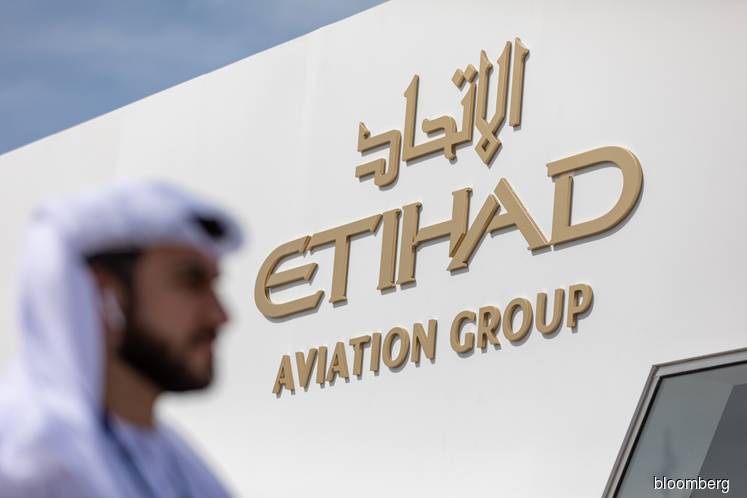 DUBAI (May 21): Owners of US$1.2 billion in debt issued by Etihad and other airlines it partly owned have given the struggling Abu Dhabi carrier an ultimatum to agree to a restructuring or potentially face legal action, two sources close to the situation said.

The move is the latest turn in the unravelling of Etihad's strategy to embark on global partnerships with airlines, the most high profile of which have since gone bankrupt.

A steering committee of debtholders, comprising largely local as well as international investment funds, submitted a proposal to Etihad about a month ago asking the carrier to agree to restructure the two bonds, due in September 2020 and June 2021, but have yet to receive a response, the sources said.

The proposal, which has not previously been reported, involves a maturity extension of the debt by up to three years but would require Etihad or its owner, the oil-rich Abu Dhabi government, to guarantee the repayment of the underlying loans that were made to airlines partly owned by Etihad such as Air Serbia and Air Seychelles.

Etihad issued the debt in 2015 and 2016 through an Amsterdam-based special-purpose vehicle, EA Partners (EAP), which then distributed the money to Etihad and the other airlines.

The original deal envisaged each airline paying off its own portion of the debt, according to the debt documentation, a copy of which has been seen by Reuters.

Under the latest proposal, creditors would write off the portion of the debt owed by bankrupt carriers Air Berlin and Jet Airways, equivalent to US$344 million, the sources said.

Debt owed by Alitalia, the Italian carrier, would be included in the proposed refinancing because Etihad agreed to cover it under a private "debt assumption agreement" signed by the two airlines in 2016, the sources said.

If Etihad does not agree to the proposal, the bondholders via EAP will make a claim in ongoing bankruptcy proceedings involving Alitalia and Air Berlin. In this way, Etihad may be required to honour Alitalia's debt, the sources said.

Etihad declined to comment. EAP, Alitalia, and the Abu Dhabi government did not respond to requests for comment.

Etihad has previously told EAP the debt assumption agreement is not enforceable against the company, according to an EAP stock exchange disclosure last month.

Even before Covid-19 froze most air traffic, the notes had lost more than half their value after three of the borrowing airlines went bankrupt.

For Etihad, which has piled up billions of dollars in losses since 2016, refinancing the debt could mean delaying repayments worth hundreds of millions of dollars while it deals with the fallout from the Covid-19 crisis.