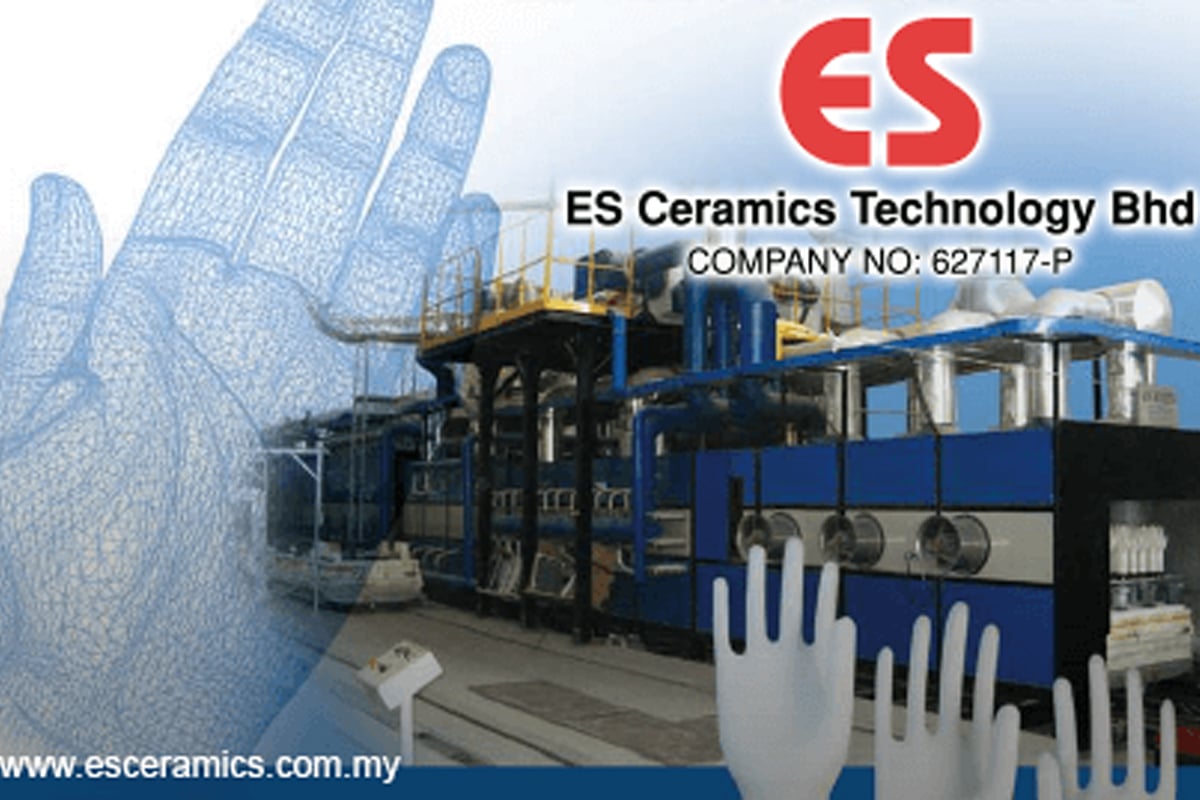 ES Ceramics Technology Bhd, which makes ceramic moulds for the rubber glove industry, appears to be in unknown hands given the company’s opaque shareholding.

A month before that, Tan held 105.26 million shares, or 23.39% of ES Ceramics, following a bonus issue of 236.56 million shares with free warrants on the basis of one bonus share and warrant for every existing share held.

Although a month has passed since he sold the two blocks of shares, there has been no indication as to who acquired them, or if the new shareholders elected to break up the block of 20-plus per cent into blocks smaller than 5% to avoid disclosure.

As the transactions were not even captured on off-market trades on Bloomberg, the price at which Tan exited is not known. It is worth noting that he had been a substantial shareholder of the company for more than 12 years, or since September 2008, when he surfaced with 6.06 million shares or an 11.44% equity interest in ES Ceramics.

Given the current investment interest in rubber gloves and industries related to healthcare or its products, Tan’s disposal of the bulk of his shareholding is rather puzzling.

The Edge did not seek comment from ES Ceramics as the change is at the shareholding level and does not involve the company.

An industry observer notes that there is much speculation over who acquired the block, but adds that it is difficult to say for certain why no substantial shareholder has emerged.

A lot of the interest in ES Ceramics and its shareholding also stems from the sudden gains in its share price. For instance, the counter shot up more than 220% from late July to early August and by more than 50% in late September to early October. On both occasions, the surges were followed by swift falls.

The company’s second-quarter financial performance, which will be announced in January, is expected to be stellar, according to speculation.

ES Ceramics is an interesting company given the current craze over glove stocks and Covid-19-related counters. It has a plant in Kawasan Perindustrian Silibin in Ipoh, Perak, and another facility in Songkhla, Thailand. Its ceramic formers, described as ceramic moulds, are dipped into latex to manufacture rubber gloves, giving the gloves their requisite shape.

According to its website, ES Ceramics began operations in 1998 producing formers for examination gloves, but has since expanded into formers for surgical, household and industrial gloves and balloons, among others.

An industry veteran tells The Edge that each ceramic former has a lifespan and can be utilised for between 40,000 and 50,000 dips, depending on various factors.

A source puts ES Ceramics’ current production capacity in Malaysia and Thailand at about 400,000 formers a month, or 4.8 million formers a year. He says there is only a handful of players with scale that produce formers for rubber gloves. Apart from ES Ceramics — the only publicly traded rubber glove former company — the other players include CeramTec Innovative Ceramic Engineering (M) Sdn Bhd, MediCeram Sdn Bhd and FormTech Engineering (M) Sdn Bhd.

It is difficult to gauge the industry’s production capacity in relation to the manufacture of rubber gloves. But in an August filing with the local bourse pertaining to its bonus issue, ES Ceramics said, “MARGMA (Malaysian Rubber Glove Manufacturers Association) had projected the demand for rubber gloves to reach approximately 300 billion pieces in 2020 with an annual growth of 12%. However, the current outbreak of Covid-19 has resulted in a 100% surge in demand globally in the first few months of 2020.

“The world’s largest rubber glove producer (that is, Malaysia), which contributes nearly 63% of global supply, has revised its estimated supply to approximately 220 billion pieces in 2020 amid the current scenario, which is much higher than the previously estimated number of approximately 188 billion pieces.”

Based on the association’s figures, back-of-the-envelope calculations indicate an overall global demand of 349.2 billion pieces, or 58% higher than anticipated.

ES Ceramics’ financials have shown a marked improvement, albeit from a low base. For the three months ended August, it posted a net profit of RM3.2 million on the back of RM11.94 million in revenue. Earnings per share amounted to 1.5 sen. In the corresponding period last year, it made a profit of RM1 million on revenue of RM8.75 million.

As at end-August, its cash and cash equivalents amounted to RM26.78 million, with negligible liabilities. Retained profits were healthy at RM24.76 million and the company’s cash flow from operating activities for the three months ended August stood at RM3.64 million.

In notes accompanying its financials, ES Ceramics said the better results were “in tandem with the increase in revenue due to high demand for formers as well as improved production activities”. It added, “The prospects for growth in the rubber glove industry are positive as the industry is expected to continue to be driven by the growth in the global and domestic healthcare industry as one of the essential items in medical supplies.”

ES Ceramics closed at 49 sen last Thursday, which translates into a market capitalisation of RM225.4 million. Year to date, the stock is up more than 350%, a sizeable appreciation, prompting speculation and interest in the buyer of Tan’s block of shares.