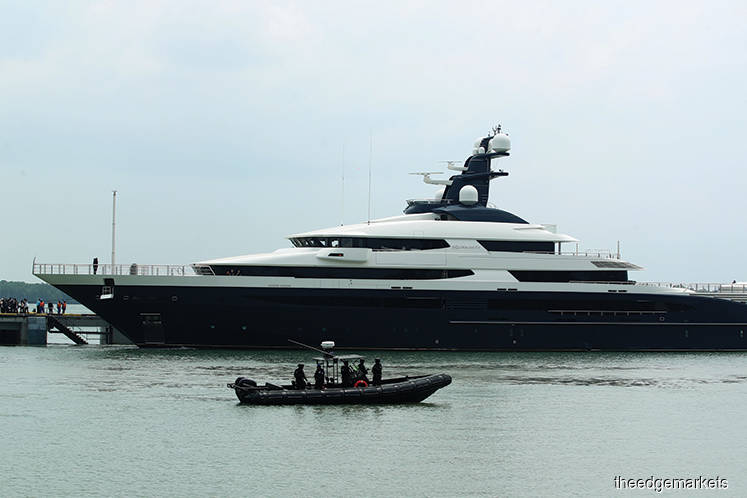 He refutes allegations by fugitive Malaysian financier Low Taek Jho's (Jho Low) lawyer that the seizure of the vessel by Malaysian authorities is against court ruling in Indonesia and the United States.

"The seizure of the Equanimity yacht by the Malaysian government, 1Malaysia Development Bhd (1MDB) and two of 1MDB subsidiaries is valid and in accordance with the procedures set out in Malaysia's laws.

"At the request of the Malaysian government as well as these companies (1MDB), the Kuala Lumpur High Court has used its jurisdiction to issue an arrest warrant against Equanimity vessel once the vessel arrived at the (Boustead Cruise Centre) Klang on Aug 7," he said during the Ministerial Question Time.

Earlier, Datuk Seri Azalina Othman Said (BN-Pengerang) had sought clarification from the Prime Minister's Department on claims by Jho Low's lawyer that the seizure of the yacht by the Malaysian government is illegal and that the government allegedly seized the proceedings of another country.

"The purchase of the yacht was allegedly made with the misuse of monies owned by 1MDB and its two subsidiaries.

"The US government has agreed for the Indonesian government to hand over Equanimity to Malaysia. So, the allegations that the Malaysian government has seized the proceedings of other countries is baseless," Liew said, adding that the question raised by Pengerang Member of Parliament is incorrect.

Further, Liew said based on the affidavit of support, which was filed in court, Jho Low and his parents Low Hock Peng and Evelyn Goh Gaik Ewe on Sept 9, 2013 flew from Barcelona to Rotterdam — near where the Equanimity was being built — to view the shipyard and the yacht the following day.

"So, it is believed that the yacht had been transported to Jho Low on or around June 2014," he said.

Liew said the government's objective in this proceeding is to sell the vessel and to declare that 1MDB Group is the vessel's legal and beneficial owner.

"Based on order from the court, it (the court) required the distribution of proceeds from the selling of this vessel to 1MDB in accordance to the extent of their ownership towards the vessel," he said.

"All of this information has been filed in court through warrant of arrest proceedings and affidavit support. All of this is in the public documents and open for public viewing," he added.

Liew said the government is still awaiting the return of Jho Low to reclaim the US$250 million (RM1 billion) yacht, which is reportedly owned by him.

"We are waiting for Jho Low's arrival in our country," he said.

"It is a violation of an Indonesian law and court decision by a politically motivated Malaysian government bent on advancing its own political agenda with little regard to existing court rulings or basic legal rights," the statement read.

Haggerty claimed the seizure of Equanimity was illegal, adding that Dr Mahathir was showing the world that the government had "no interest in the rule of law", which he said was similar to the 1988 judicial crisis.

The superyacht, allegedly acquired using 1MDB funds, was first seized by Indonesian authorities in February off the coast of Bali. The seizure was later declared null based on technical grounds.

Indonesian police seized the boat again in July following a formal request for legal assistance from the United States.

On Aug 7, the yacht arrived at the Boustead Cruise Centre in Port Klang months after it was seized by international authorities.