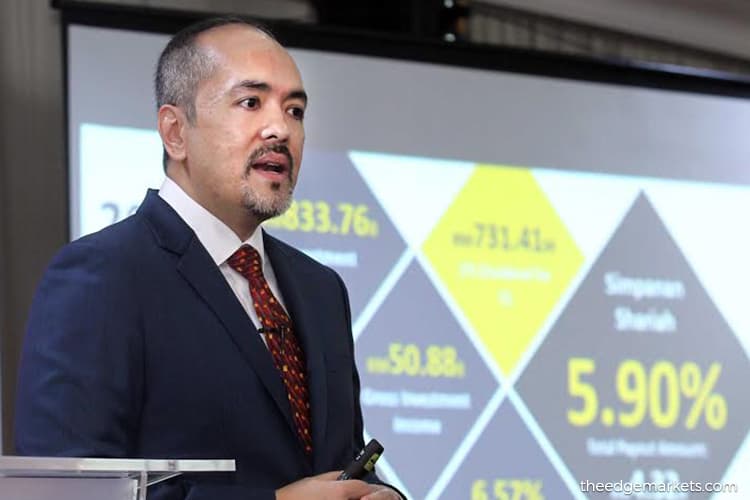 Alizakri: 2019 can be summarised as the year where uncertainty will be the new certainty. Photo by Kenny Yap

KUALA LUMPUR (Feb 18): The Employees Provident Fund (EPF) reported a 4.3% decline in its investment income to RM50.88 billion in 2018, amid a series of events that unfolded both domestically and globally that had impacted markets around the world.

During a press briefing on the fund's performance for 2018, EPF chief executive officer Tunku Alizakri Alias said some of the key events that had stirred uncertainty in the markets include the US-China trade war, the plunge in crude oil prices, the Brexit vote and the interest rate hikes and midterm election in the US.

In Malaysia, the 14th general election had given rise to uncertainties following the change in government.

"In terms of quarter-to-quarter performance, the first three quarters of the year were not too bad actually. The bloodbath began in the fourth quarter," said Alizakri.

In the fourth quarter, the fund registered gross investment income of RM10.99 billion, lower than the RM12.88 billion, RM12.39 billion and RM14.61 billion recorded in the first, second and third quarters respectively.

"However, that is still quite an achievement considering how bad things were at the end of the fourth quarter," he added.

Alizakri said the losses were not limited to the Malaysian market but were instead a global phenomenon, pointing to news headlines of pension funds in Japan, Canada, US and UK recording significant losses for the year.

Equities were the largest driver of the fund's gross investment income for the year, accounting for 58% or RM29.28 billion of its investment income, followed by fixed income (36%), real estate and infrastructure (4%) and money market (2%).

Looking ahead, Alizakri said the uncertain conditions will continue in 2019 amid several developments that may impact the global economy, adding that the general cloudy outlook will be the new norm going forward.

"2019 can be summarised as the year where uncertainty will be the new certainty. For example, there was a lot of talk about the upward trend in the US interest rates last year and look what happened — the US has suddenly taken a very dovish stance.

"Uncertainty will be the new norm at this point in time," he told the media at a briefing today.

Alizakri pointed to several events around the world that will continue to contribute to the uncertain environment such as the end of tax cuts in the US which could slow growth, the introduction of fiscal and monetary stimulus to combat growth slowdown in China as well as weakening production and Brexit risks in Europe and UK.

"The possible bright spot might actually be right in our backyard. Asean is still seen as an emerging market but at the same time also provides a relatively safer haven for money," he said.