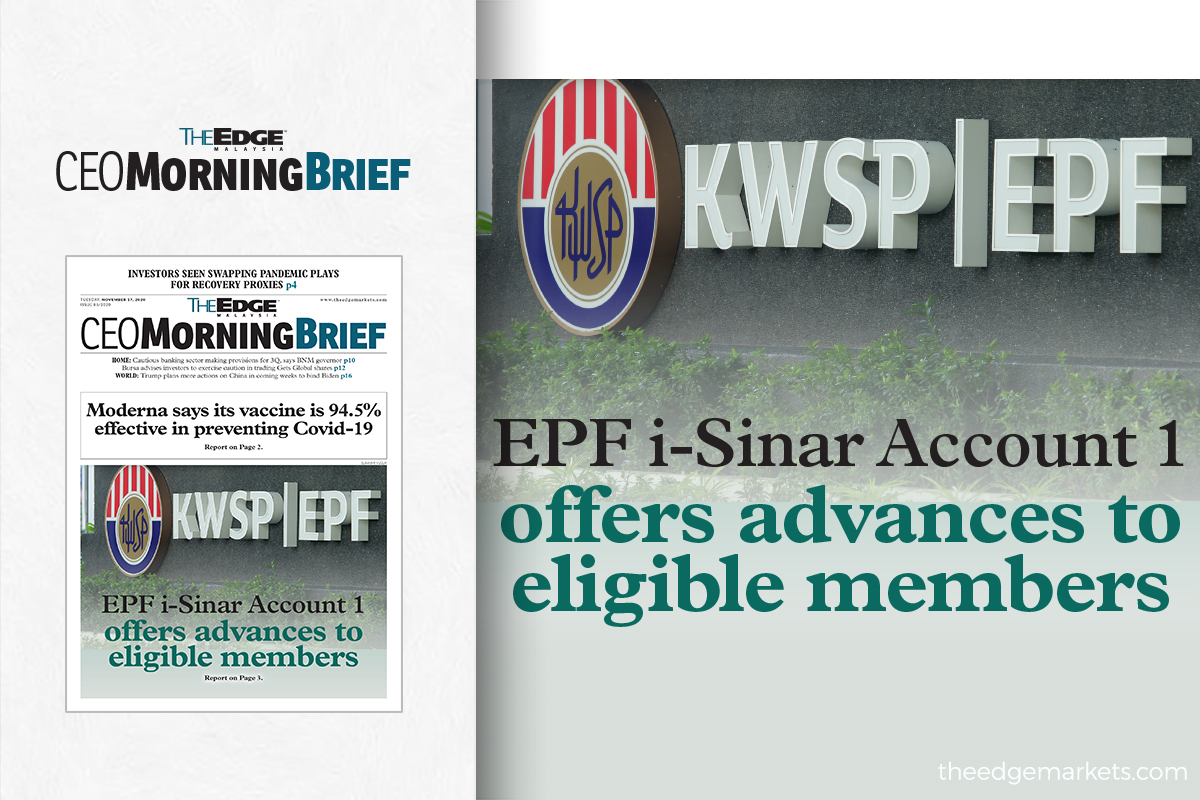 KUALA LUMPUR (Nov 16): The Employees Provident Fund (EPF) announced a scheme called i-Sinar, which will permit eligible members to take an advance from their Account 1.

The facility will be open for application starting next month (December). The advance will be credited into members' bank accounts in January, once applications are received.

However, Alizakri emphasised that this facility is not a "withdrawal" but rather an "advance", pointing out that eligible members will need to replenish the amount withdrawn.

This is in contrast to the measure announced in Budget 2021, which stated that contributors would be able to withdraw RM500 per month from their EPF Account 1, up to RM6,000 a year.

The announcement in Budget 2021 sparked hot debates whether Malaysians should be allowed to dip into their hard-earned retirement savings in the current tough economic environment. And some quarters pointed out that the need for Malaysians to tap on the saving in Account 1 highlights the lack of a social safety net in place for critical times like the current economic scenario.

The provident fund said i-Sinar will only be open to active members who have lost their jobs, or if they are on no-pay leave or have no other source of income.

"This facility has allowed us to assist those in need of assistance, as well as work with our mandate — to safeguard members' future retirement savings," said Alizakri.

Generally, eligible members will have access to up to 10% of their savings in Account 1, subject to having a minimum balance of RM100.

For those with an Account 1 balance of RM90,000 and below, they will have access to any amount up to RM9,000, with the advance to be granted on a staggered basis over a period of six months.

For example, if a contributor has RM90,000 in his account, he will be able to receive a total advance of RM9,000. He will receive up to RM4,000 in the first month, while the balance will be divided equally over the next five months.

For those with balances above RM90,000 in Account 1, they still have access to up to 10% of their Account 1 savings. However, the advance will be capped at RM60,000 although the contributors have more than RM600,000 in Account 1.

Members who apply for the facility will be required to replace the full amount advanced with all future contributions to be credited into Account 1 in its entirety, until the amount advanced is replenished.

"There is no timeline for members to replenish their accounts. This will only start when the affected member gets reemployed or when their businesses start picking up again," Alizakri said during a media briefing today.

Meanwhile, Alizakri pointed out that there is no such thing as a "free lunch" as there will be implications for eligible members if they choose to utilise this facility, given that they will forgo their compounded returns when they take an advance on their account.

Moreover, the other EPF members that are not eligible for the facility will also be affected, given that the facility, which requires an allocation of another RM11 billion to RM15 billion, will reduce the pool of money the fund has for investment and therefore affect future dividend payouts.