EPF chief to FGV: Why the premium price for Eagle High? 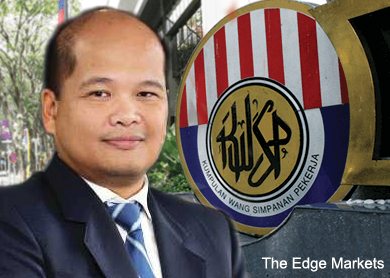 “One of the things we (EPF) expressed were the concerns on valuation and in relation to the structure of the deal.

“But we are waiting for them (FGV) to formally notify the shareholders of the actual transaction when it comes to voting. I am pretty sure we raised a lot more than this issue. (We) hope to get more clarification on this issue,” said Shahril.

Shahril was speaking to the media after sitting as a panellist in a Bursa Malaysia-organised discussion on value proposition for the environment, sustainability and governance investment.

He was commenting on FGV’s proposal to buy a 37% stake in Eagle High from controlling shareholder Rajawali Corp for about US$680 million (RM2.55 billion).

The purchase consideration will be settled by US$632 million cash plus the issue of 95 million new FGV shares. The proposal has plummeted FGV’s share price to a record low of RM1.65 on Monday. The stock closed at RM1.68 yesterday.

When asked if the EPF would review its 5% shareholding in FGV, particularly at a time when the share price has been performing poorly, Shahril said the pension fund has pulled out of several companies in the past.

“The most notable one was Malaysian Airline System Bhd (MAS). Once we felt that its business model was not sustainable, we exited and sold out the shares in the company. [We have done so with] many other companies in the past.

“Most of the time it is not feasible because we tend to be a small shareholder. We took the view that the company (MAS) was not sustainable anymore,” he said.

Shahril pointed out that the EPF has already reduced its stake in FGV to 5% from about 10% at its peak, following the listing exercise in 2012.

The Edge Financial Daily reported yesterday that an EPF representative had raised questions at FGV’s AGM on Tuesday on the rationale behind the RM2.55 billion acquisition, particularly the generous premium that was accorded to the deal.

The EPF representative told FGV shareholders and the management at the shareholder meeting that the premium of 70% to market price was a pricey deal as opposed to a 30% premium which was acceptable, according to The Edge Financial Daily.

“We have expressed our concerns or issues which hopefully it (FGV) would address when the time comes for the actual vote,” said Shahril.

“We note that it (the acquisition) is still subject to due diligence and a shareholders vote in the future, so there was no vote taken on the issue yesterday (Tuesday). Our representative would have taken the opportunity to express views on the reported facts released so far. So we will wait and see,” he added.

The Edge Research's fundamental score reflects a company’s profitability and balance sheet strength, calculated based on historical numbers. The valuation score determines if a stock is attractively valued or not, also based on historical numbers. A score of 3 suggests strong fundamentals and attractive valuations. Go to www.theedgemarkets.com for more details on a company’s financial dashboard.