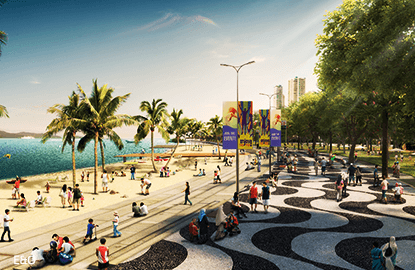 Measuring 60 acres, the cost of the project, which is several hundred millions of ringgit, will be borne by the Penang state government that intends to contra the payment in kind, said Chief Minister Lim Guan Eng.

"E&O will surrender the 131 acres of land to us for free. They will bear the cost of reclamation but we will need to pay for the landscaping activities, which could cost hundreds of million ringgit.

"We plan to pay in kind because we don't have that much cash, perhaps through development plans (consideration). It is a sore point for E&O because they have to come up with the cost," he told a press conference here today.

The reclamation is part of the 131-acre land within RM1.04 billion Phase 2A of the Seri Tanjung Pinang 2 (STP2) project, which measures 760 acres.

Dredging works will start next month and are expected to take between eight and 10 months to reclaim the site, with another eight months for the soil to settle before landscaping work begins, E&O group corporate strategy director Lyn Chai said.

E&O, which took over the reclamation project from a previous concessionaire, completed 240-acre STP1 in 2006.

It will feature a seaside retail F&B segment (Phase 2 of the project), water gardens, beach and coastal grove, he said, adding that the casuarina trees would be preserved.

The Gurney Wharf project would see the extension of the beach by an average of 80m, with an artificial beach of measuring 400m, along the 1.5km stretch of Gurney Drive, said Grant Associates architect Mike Wood. It will resemble San Francisco's Fisherman's Wharf or London's Canary Wharf.

"It would also feature an eight-lane expressway on the reclaimed land. The assets such as the trees and promenade would be incorporated into the landscape development," Wood added.