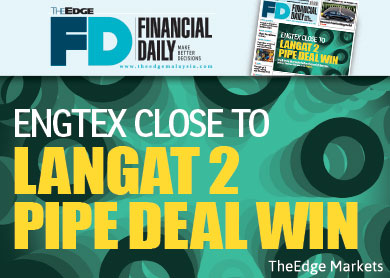 KUALA LUMPUR: Pipe wholesaler and manufacturer Engtex Group Bhd is confident of securing pipe contracts worth RM110 million for the Langat 2 water treatment plant in Selangor, viewed by analysts as a key driver for the group’s earnings going forward.

It was reported that the Langat 2 project, which is crucial to the state’s impending water crisis, will require about 50,000 tonnes of pipes worth RM200 million.

“I would say that we are confident of getting the Langat 2 project. We are tendering for the pipe contract and we are at the final stage. We will know the results before the end of this year,” Engtex group managing director Datuk Ng Hook told The Edge Financial Daily.

If Engtex secures the contract, the group will supply pipes for Packages 1 to 5 for the Langat 2 project from a total of 13 available packages.

He said tender details for Packages 6 to 13 have yet to be revealed.

“We don’t do the laying [of pipes], but we will supply the pipes to the main contractor, which is a consortium made up of MMC Corp Bhd, Salcon Bhd and Ahmad Zaki Resources Bhd,” Ng said.

On April 17 this year, the consortium announced that it was awarded the Langat 2 construction project with a contract sum of RM993.8 million after it received a letter of acceptance from Pengurusan Aset Air Bhd for the first phase of the project.

“Our manufacturing plant is in Serendah, Selangor. We have the transportation advantage. Also, we think they might be kept busy with the Pengerang integrated petroleum complex project in Johor,” Khoo said. Boon & Cheah — the only other pipe manufacturer capable of producing 3m diameter pipes suitable for Langat 2 — has its manufacturing plants in Perak and Johor.

Khoo said Engtex had embarked on upgrading its Serendah plant to increase the diameter size of the mild steel pipe production to 3m from the current 2.6m. With a capital expenditure of RM4 million to RM5 million, the upgrade includes capacity expansion to enable the plant to hit 42,000 tonnes per year from 36,000 tonnes currently. The plant is expected to be completed by the fourth quarter of this year.

With the upgrade, Khoo gave an assurance that the plant, which had a utilisation rate of above 55% as at financial year 2013, can cope with orders for Langat 2.

He dismissed concerns that Langat 2 could be scrapped, adding that the RM3.93 billion Pahang-Selangor raw water transfer project is 96.7% completed. The project was implemented to meet the water supply demand in Selangor, Kuala Lumpur and Putrajaya until 2025.

Apart from Langat 2, Engtex is also targeting the huge pipe replacement market of about 43,890km of asbestos cement (AC) pipes nationwide. The firm estimates the value of three million tonnes of pipes to be RM10 billion. Comparatively, the Malaysian Water Association has estimated a figure beyond RM20 billion to replace the AC pipes or RM500,000 per km, which includes laying work.

“We don’t concentrate solely on Langat 2. The piping replacement market is much bigger than Langat 2,” said Khoo.

For instance, he sees opportunities for Engtex to replace the ageing piping system that will connect to the Langat 2 plant once it is completed, adding that ageing pipes cannot sustain the higher water pressure from the outflow of treated water from Langat 2.

Leakage of treated water due to ageing AC pipes and infrastructure problems, according to Engtex, accounts for more than 75% of non-revenue water (NRW), which is water that is produced and “lost” in the system before it reaches consumers. Last year, nationwide, NRW rose to 36.6% or about 5.69 billion litres a day from 36.4% in 2012.

This article first appeared in The Edge Financial Daily, on October 27, 2014.