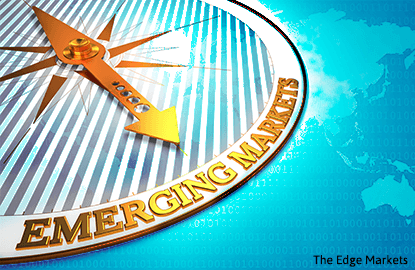 LONDON (Feb 3): An unexpected Chinese interest rate raise on Friday hit emerging stocks led down by weakness across Asia, while the Turkish lira resumed its downward trajectory as data showed a sharp jump in inflation.

The Asian losses offset modest gains in Europe and put the benchmark emerging equity index on course to end the week flat, despite trading up earlier in the week on the back of strong factory data across the developing world.

The signs of a move towards tighter policy overshadowed data showing Chinese factory activity expanded for the seventh straight month in January, albeit at a slower rate.

Many linked the move to Beijing's efforts to alter expectations of a one-way path for the yuan as expectations of currency weakening have contributed to huge capital outflows.

"The slide in the renminbi that we saw last year has reversed in January — the local authorities want to provide more support for the currency against the (US) dollar or other currencies they have trade flows with," said Cristian Maggio, a strategist at TD Securities.

The move pushed the Chinese yuan a touch firmer while 10-year bond yields hit the highest since August 2016 before easing. The Taiwan dollar hit a 19-month high, but as the US dollar recovered some losses most emerging currencies slipped.

The Turkish lira snapped a four-day winning streak, falling 0.4% against the US dollar although it is on course for its best weekly gain since last May.

Economic data remains overwhelmingly negative, with consumer inflation jumping 2.46% in January, well above forecasts of 1.78% in a Reuters poll and inching towards a double-digit annual increase.

The government said it could temporarily remove a tax on white goods to support domestic demand, boosting shares in manufacturers Arcelik and Vestel by more than 3% at one point, the former surging to record highs.

The overall Turkish index was flat, although lira weakness has propelled it to the fourth straight week of gains.

Investors remain lukewarm on Turkey, noting deteriorating fundamentals and the central bank's reluctance to raise interest rates to rein in inflation, although there are signs some funds are being tempted to buy the beaten-down assets.

"We have had very little exposure to Turkey for a long time, since before the coup and our exposure has gradually reduced," said Kieran Curtis, a bond fund manager at Standard Life Investments.

"We've done very well by being underweight and that's the fact which is making it tempting to go back in rather than anything we see coming out of Turkey."

The Russian rouble weakened 0.2% against the US dollar before a central bank rate-setting meeting later at which the bank is seen holding rates at 10%. The currency's gains have stalled since authorities said they would start buying hard currency to replenish depleted reserve funds.

Russia's services sector activity expanded at the fastest pace in 8½ years in January, adding to evidence that the economy has turned a corner.

"In the long term (FX purchases) is a respectable goal that will add to Russia's strength and give the government some additional budget discipline. But at the same time it will help weaken the currency, smooth volatility, and reduce the correlation between the (US) dollar/rouble exchange rate and oil prices," Maggio added.