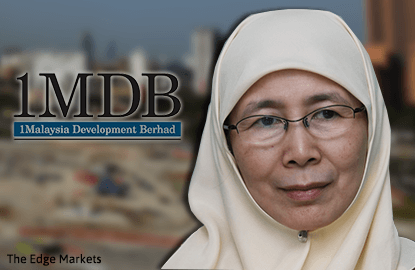 Wan Azizah said that she had filed the motion under 18(1) and 18(2) Standing Oder on May 24, but was informed by the Speaker that her motion was rejected.

"I regret the rejection of such an important motion (which) involves the public interest," Wan Azizah told a press conference at the Parliament lobby today.

She said this emergency motion is related to a motion she had tabled on April 28 to seek the House to debate the report tabled by the Public Accounts Committee (PAC).

"Until today, the PAC report, official answers from the government in Dewan Rakyat have failed to provide answers to the 1MDB scandal, worst still the attempt to cover up the information through the classification of the Auditor General's report," Wan Azizah said.

She said the government, especially the Prime Minister should be held responsible for whatever weaknesses and abuses in 1MDB, which involved billions of Ringgit of public fund and tarnish the good name of the country in the eyes of the global community.

"Therefore, I call upon the government to answer all questions raised through the presentation of a White Paper on 1MDB in the parliament," She added.

Her motion read:  "that the Dewan Rakyat to urge the Prime Minister to withdraw the classification of the Auditor General's report on 1MDB as official secrets under the Official Secrets Act 1972."

She had raised four pertinent questions in her motion that touched on the secrecy surrounding the 1MDB:

1. Why the tabled PAC report blacked out the information related to the letter form Bank Negara Malaysia related to the owner of Good Star Ltd which is not a subsidiary of PetroSaudi Group?

2. Why the PAC Chairman acted on removing the sentence agreed upon by the PAC meeting which related to Low Taek Jho (Jho Low) wanted bby the police to assist in investigation over the 1MDB scandal?

3. How could the Parliament get answers relating to the questions on 1MDB, which should be debated when the Auditor General's report on 1MDB was classified as secret document?

4. As long as the Auditor General's report was classified, how could the Attorney General assist the international investigations from countries such as United States, United Kingdom, Luxembourg, Switzerland, Australia, Singapore and Hong Kong?

In a reply to Wan Azizah dated today, Pandikar rejected her motion.

"I have studied the matter raised by Yang Berhormat Datuk Seri and found that the motion brought forward is a motion that needs the consent of the House."

Wan Azizah and Gopeng MP Lee Boon Chye had filed motions to seek the House to debate the PAC report. However, it is unsure when the motion would be able to tabled in the House.